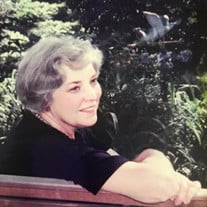 Joyce Elnora Justus of Middletown, Kentucky, passed away on July 12, 2020, after a lengthy battle with dementia. Joyce Walden, born December 17, 1937, grew up in Missouri. She was smart, kindhearted, beautiful, and gifted. She was an artist and began her career painting landscapes. She became adept in oil, watercolor, sculpting, mold making, woodworking, photography, and the fabric arts. However, she was best known for her intricate soft sculptures which were collected nationally and internationally under the name “Justus Dolls.” They were exhibited in the Smithsonian Institute in Washington DC, Actor’s Theater, and the Louisville Ballet, most notably. She was a featured artist and exhibitor at the Kentucky Arts and Crafts Guild. In 1989 Joyce was profiled in a book by Phyllis George Brown entitled, Kentucky Crafts Handmade and Heartfelt. In her everyday life, Joyce was an inspired gardener, avid reader, gourmet cook, historic home renovator, a wonderful mother and wife. A gentle soul for whom flowers danced. Twice widowed, Joyce was preceded in death by her husband of 48 years, David E. Justus, and by James Nogalski with whom she had 3 children before she turned 22. She is also preceded in death by her daughter, Judy Nogalski Clemmens. She is survived by her four remaining children: James Nogalski (Waco, TX), Bill Nogalski (New Orleans, LA), Robin Justus (Louisville), and John Justus (Louisville). Her surviving family also includes the spouses of her children (Nelson Clemmens, Melanie Greer Nogalski, and Ginger Legeai Nogalski), her sister (Donna Cox), her grandchildren (Megan Nogalski Murray and Toni Nogalski, and her dear friend of many years (Sue Keller). A memorial service for family and close friends will be arranged at a later date.

Joyce Elnora Justus of Middletown, Kentucky, passed away on July 12, 2020, after a lengthy battle with dementia. Joyce Walden, born December 17, 1937, grew up in Missouri. She was smart, kindhearted, beautiful, and gifted. She was an artist... View Obituary & Service Information

The family of Joyce Elnora Justus created this Life Tributes page to make it easy to share your memories.

Joyce Elnora Justus of Middletown, Kentucky, passed away on July...

Send flowers to the Justus family.