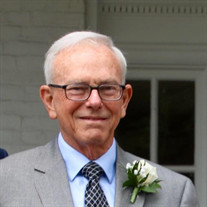 Joseph Henry Ziegler, 76, passed away unexpectedly on Wednesday, April 8, 2020. Born December 27, 1943 to George and Gertrude Ziegler, he went on to Flaget High School and Ahrens Trade School before graduating from Speed School at the University of Louisville as a mechanical engineer. He went on to work for General Electric, retiring after more than 30 years of service and discovering that pigs could fly. Closer to his heart though was his family. He married Barbara Darlene Wilson August 24, 1968, who undoubtedly was the love of his life and “Queen of his Heart.” Together they had three children Jenny, Debbie and Alex; it was the adventure of a lifetime. Joe prized his family above all else and days fishing at the lake with his brother Bill. Evenings spent coaching T-ball and baseball were treasured. Joe could fix anything and spent many a day in his workshop with Alex. He loved working in the yard, but nothing beat days spent with his grandchildren Andrew, Mia, Jamie, Hunter, Claire and Emily; he never missed a concert or balked at a science fair project — it was all “Gucci good!” “The Old Man with Gray Hair” could spin a yarn like no other and his highly anticipated Christmas letter was the highlight of the year. Simply put, he was our hero. A special word of thanks for the abundant loving kindness shown by his neighbors and the staff at Norton Brownsboro Hospital. He was preceded in death by his father, George; mother, Gertrude; brothers, George and Robert; and sister, Margaret. He is survived by his beloved wife Barbara; children Jennifer Bratton (Tim), Deborah Ziegler, and Alex Ziegler (Michelle); grandchildren Andrew, Mia, Jamie, Hunter, Claire, and Emily; brothers Don (Jan) and Bill Ziegler; sister Phyllis (Neal) as well as countless nieces, nephews, cousins and friends. Due to government guidelines pertaining to COVID19, there will be private entombment at Resthaven Memorial Park. Memorial Service will be announced at a later date. Arrangements under the direction of Pearson’s. Memorials to J. Graham Brown Cancer Research Center or donor’s favorite charity.

Joseph Henry Ziegler, 76, passed away unexpectedly on Wednesday, April 8, 2020. Born December 27, 1943 to George and Gertrude Ziegler, he went on to Flaget High School and Ahrens Trade School before graduating from Speed School at the University... View Obituary & Service Information

The family of Joseph Henry Ziegler created this Life Tributes page to make it easy to share your memories.

Send flowers to the Ziegler family.