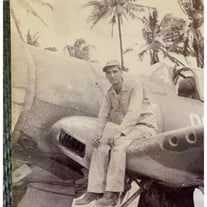 Joseph Albert “Bert” Paradis, Jr., formerly of Louisville, died at his home in Naples, Florida on December 21. Born March 24, 1920, the second child of Joseph Albert Paradis, Sr. and his wife, Catherine Elizabeth, Bert grew up in Louisville, learned to drive when he was eight, attended Sacred Heart Model School, graduated from Male High School in Louisville and Georgetown Prep in Bethesda, Maryland. He attended Georgetown University in Washington, D.C. and the University of Virginia before enlisting in the Naval Air Corps in 1941. Transferring to the Marine Corps, he saw action as squadron leader of VMF-22, “The Wake Avengers”, became an “ace” and received the Distinguished Flying Cross. Returning to Louisville, Bert married Mary Jeanne Rammacher of Cincinnati, Ohio and found employment at Brandeis Machinery & Supply Corp., his family’s firm. Bert and Jeanne had seven children. He became President of Brandeis upon his father’s death in 1949 and worked at the firm until his retirement in 1990, when he and Jeanne moved to Naples, Florida. After Jeanne’s death 1n 1995, Bert married JoAnn Mason Willig, and they continued to reside in Naples until his death. Bert was a former member of the Louisville and Jefferson County Air Board, the board of directors of Citizens Fidelity Bank & Trust Company, and one of initial founders of the Cathedral Heritage Foundation. He was also the founder of Collier Harvest in Naples, Florida. He is preceded in death by his parents, his sister Celanire Paradis Buchart, his first wife and his younger daughter, Mary Helen (Noni). He is survived by his loving wife, JoAnn and her two daughters, Brooke Kelly and Jennifer O’Scannlain (Sean), his daughter, Mary Kristina, five sons: Joseph Albert, III, James F. (Michelle), John M., Steven J. and David H. (Kate), twenty grandchildren and step-granchildren and as well as seventeen great grandchildren. A funeral mass will be celebrated at St. Ann Catholic Church in Naples on December 30 at 11:00 a..m. Burial will follow in a private ceremony at Calvary Cemetery in Louisville, Kentucky. A memorial mass will be arranged at the Cathedral of the Assumption in Louisville at a later date. In lieu of flowers, expressions of sympathy may be made by contribution to the Cathedral of the Assumption, Collier Harvest or the donor’s preferred charity.

The family of Joseph Albert "Bert" Paradis Jr. created this Life Tributes page to make it easy to share your memories.

Send flowers to the Paradis family.