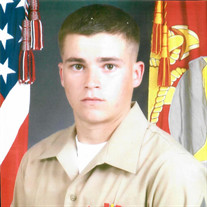 Joseph (“JAY”) Howard Dosker, Jr. Beloved Son, Brother, Grandson and Nephew, was born April 28, 1989 in Louisville and unexpectedly passed away on April 2, 2019. Jay was a proud Marine Corps Veteran of two tours of duty in Iraq and Afghanistan serving with the Infantry of the Second Battalion, Ninth Marines, Echo Company. He was also a dedicated volunteer fireman with the Beuchel Fire Department, and an active EMT first responder. Jay joined the Marines after graduating from Ballard High School in 2007. In addition to his career accomplishments, he was a passionate, and talented, skateboarder. His honesty, winning smile and easy-going style endeared him to all who knew him, and he will be sorely missed by all those whose lives he touched during his brief time here with us. He is survived by his parents, Joseph H. Dosker Sr, and Lucy Palmer-Ball Dosker, as well as his sister and soulmate Katherine C. Dosker and his faithful companion dog, Dixie. In addition, his survivors include grandmothers Joan S. Dosker and Mary M. Palmer-Ball, as well as Uncles, William L. Dosker, C.D. Dosker III and Benedict V. Palmer-Ball Jr. Visitation will be held at Pearson’s Funeral Home at 149 Breckenridge Lane in St. Matthews, Saturday, April 6th from 1-7 p.m. His funeral service will be held Sunday April 7, at 1 p.m. at St. James Episcopal Church, 401 LaGrange Road, Pewee Valley, KY. Expressions of Sympathy may be made to WHAS Crusade for Children, 520 West Chestnut Street, Louisville, KY 40202, or Warrior Canine Connection Healing Quarters, 14934 Schaeffer Road, Boyds, MD 20841 or [email protected]

The family of Joseph "Jay" Howard Dosker Jr. created this Life Tributes page to make it easy to share your memories.

Send flowers to the Dosker family.