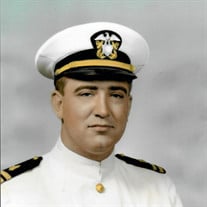 Joseph Charles Babey III, MD joined our Lord in heaven on April 30, 2021. He was preceded in death by his beloved daughter, Brigid Babey Johnson, and his parents. Joe died peacefully in the arms of his loving wife, Sheri Babey. Left to cherish his memory are his sons Matthew, Alex (Amy) and Joseph IV (Stephanie) Babey; stepsons Aaron (Anna Maria) and Eric (Amy) Goss; grandchildren Sarah Gundle (Cody), DJ Johnson, Morgan, Claire, Joe V, Samantha, Nick, Danielle & Chris Babey, Austin & Cameron Goss and Taylor & Drew Allen; great grandchildren Dacodah & Hadley Gundle; sisters Janet (Augusto) and Mary (Walter) Zambrana and the mother of his children, Sandra Babey. Joe served his country and his fellow man as a physician and surgeon. He served in the US Navy from 1965 to 1969 and was the senior medical officer for the USS Squadron Destroyer 36. He was a pediatrician for over 55 years, practicing with Louisville Pediatric Specialists and the University of Louisville Department of Pediatrics. He was voted by his peers as one of the Top Ten Physicians in Louisville. Since retirement, he maintained a gratis appointment in the Department of Pediatrics at the University of Louisville. Joe received numerous awards throughout his career. He was recognized by Caritas Medical Center and Audubon Hospital for his outstanding contributions to their Department of Pediatrics. He received the Trinity High School Hall of Fame recognition, the Salute to Catholic Schools Alumni recognition, the Catholic Schools Distinguished Alumni award, the Humanitarian Award for the National Hydrocephalus Foundation and numerous other awards of recognition. Joe was a dedicated and loving individual as husband, father, grandfather and great grandfather. He was also a physician who spent tireless hours volunteering to serve the needs of the indigent and the challenged. He volunteered with the family practice residency program. He received the Maryhurst Journey of Hope Award, volunteering to see the Maryhurst residents on his off days and in his office. Upon retirement, he performed numerous volunteer hours over a three-year period, developing an on-site clinic for the children and young adults at Boys and Girls Haven in Louisville. For three additional years, he provided volunteer medical care for patients at Harlem Heights, Compassionate Care Clinic and the Neighborhood Health Clinic in and around Estero, FL. Joe also provided athletic physicals for indigent teens in Louisville high schools and for the Florida Disability Olympics. At the age of 74, Joe was asked to join the Florida State University faculty and became a mentoring teacher in the family practice residency program for pediatrics at Lee Health. Joe was a member of St. Bernadette Catholic Church in Prospect, KY and Our Lady of Light Catholic Church in Estero, FL. Funeral Mass will be at 10 am Wednesday, May 5, 2021 at, St. Bernadette Catholic Church, 6500 St Bernadette Ave, with private burial at Calvary Cemetery. Visitation will be from 4-8 pm Tuesday, May 4, 2021 at, Pearson’s, 149 Breckenridge Lane Expressions of sympathy may be directed to the Trinity High School Steinhauser Foundation in Louisville, KY or the Neighborhood Health Clinic in Naples, FL.

Joseph Charles Babey III, MD joined our Lord in heaven on April 30, 2021. He was preceded in death by his beloved daughter, Brigid Babey Johnson, and his parents. Joe died peacefully in the arms of his loving wife, Sheri Babey. Left to cherish... View Obituary & Service Information

The family of Joseph Charles Babey III, M.D. created this Life Tributes page to make it easy to share your memories.