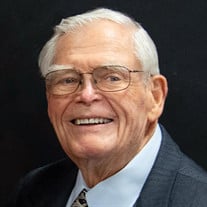 John C. Wright, II, MD, passed from this earth on Thursday, May 21, 2020, at age 92 with his family by his side. He was born in Sodus, NY on 6/16/1927. He graduated from Webster High School in 1945, received his undergraduate degree from University of Rochester and was a member of the Theta Delta Chi Fraternity. He received his medical degree from University of Buffalo Medical School, interned at Flower & Fifth Avenue Hospital in New York City and completed his residency at Waterbury Hospital in Connecticut. He was a member of the Civilian Air Patrol during WWII in Webster, NY and served two years in the Navy. Dr. Wright, a widely honored Geriatrician and Professor Emeritus of the University of Louisville School of Medicine, dedicated 40 years to improving health care for older adults. He established the John C. Wright Professorship on Aging to ensure support of a distinguished physician geriatrician to guide quality care. Dr. Wright earned numerous honors and awards for his academic and professional contributions, including a Kentucky Geriatrics Society Achievement Award for Outstanding Contributions to Geriatrics in Kentucky, Kentucky Citizen Doctor of the Year by the Kentucky Academy of Family Physicians, and an Award for Exemplary & Distinguished Contributions to the Field of Gerontology and Practice of Geriatrics by the Kentucky Association for Gerontology. Most recently, Dr. Wright was presented a Gold Standard for Optimal Aging Award by the University of Louisville Trager Institute and a Lifetime Achievement Award by ElderServe at their 30th Annual Champion for the Aging Award Luncheon. Beginning his career, Dr. Wright had a busy Family Practice in Manchester, CT. and served as President of the Connecticut Academy of Family Physicians. Before his University of Louisville leadership, he was chairman of the Family Practice Residency Programs of both University of Connecticut and Wright State University. Known by family and friends as Jack, he was indeed a Jack of all trades, and seemed never to encounter a machine or gadget he could not fix. He even held a patent on an innovative ski/luggage rack. Jack was an avid downhill skier and served on Paoli Peaks ski patrol well into his 80’s. His love for the outdoors also took him camping, house-boating, hiking and trail riding. He was a compassionate animal rescuer and had quite a diverse menagerie over the years which blessed his family greatly. At one-point Jack exclaimed, “Just call me Noah!” For many years Jack sang in the choir at St. Francis in the Fields Episcopal Church, Louisville, KY. He served on medical mission trips in Ghana as part of a Diocesan Exchange Program and St. Francis and he generously supported the Anglican Diocese of Tamale, Ghana Community Nurse Education program as well as the education of Hasan, a young Ghanaian man. Fifty years after beginning pilot training, Jack finally earned his pilot’s license and enjoyed flying over the Kentucky countryside. He was a world traveler, itinerant doodler, dancer, master griller and student of many things. His children fondly recall his joyfully sharing ice cream sundaes in the middle of the night to celebrate having delivered a baby – one of many! For his children, he left a legacy of faith, fierce work ethic, thriftiness, generosity, and deep love for each other. He is preceded in death by his father, John Embry Wright, his mother, Frances Horton Wright, his wife of thirty-three years, Jane Atwood Wright, and grandson, Mark Isaac Storm. He is survived by Dr. Kay T. Roberts, Nurse Practitioner, his life partner of 28 years and colleague of 34 years. Drs. Wright and Roberts were bonded by a strong mutual love and friendship. They worked collegially in many health care settings including the U of L Geriatric program, the Ghana connection, and Dr. Roberts’ community health mission in Louisville’s Smoketown community. They shared the excitement of travel, nature, horses, dogs as children, writing, family, and Spiritwood, their wooded home in Simpsonville, KY - and Stream, a rock bottom creek that crosses their land. Dr. Wright is also survived by his four children: Kim Wright Murphy (Jay), Tamilyn Wright Storm (Rob), Jerilyn Wright Chandler (Peter) and John C Wright, III (Dana); his beloved sister and first dance partner, Jerilyn Horton Wright; eleven grandchildren: Emily Murphy, Amelia Murphy, Elizabeth Murphy, Matthew Storm (Julia), Rebecca Storm White (Tim), Zachary Chandler (Lauren), Amanda Chandler Westerwick (Kevin), Emily Chandler Lundquist (Drew), Heidi Chandler Bucknam (Blake), Joshua Chandler and Meagan Chandler; great-grandson, Roman Chandler; two expected great-granddaughters; nieces and nephews; Kay’s children, Joseph Roberts (Tammy), Katie and Rachel granddaughters; Daniel Roberts (Mary), Hannah and Ariel, granddaughters. A memorial service to celebrate the life of John C. Wright, II, MD will be announced at a later date. In lieu of flowers, expressions of sympathy can be made to the John C. Wright, M.D. Endowed Professorship on Aging, University of Louisville School of Medicine. Please write checks payable to the University of Louisville Foundation noting John C. Wright, M.D. Endowed Professorship on check or envelope, and send to University of Louisville Advancement, 132 East Gray Street, Louisville, KY 40202. Please contact Lauren Zachry-Reynolds at (502) 852-0147 for more information about how to give to this important program.

John C. Wright, II, MD, passed from this earth on Thursday, May 21, 2020, at age 92 with his family by his side. He was born in Sodus, NY on 6/16/1927. He graduated from Webster High School in 1945, received his undergraduate degree from University... View Obituary & Service Information

The family of John C. Wright, II, MD created this Life Tributes page to make it easy to share your memories.

John C. Wright, II, MD, passed from this earth on Thursday, May...

Send flowers to the Wright, family.