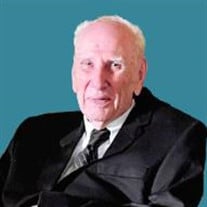 John was born on January 8,1934 to H.H. & Olive Van Dyke in Louisville, Ky. He graduated from Eastern High School and later from Kentucky Wesleyan with a Bachelors Degree. He was President of Sigma Delta Fraternity and President of the Inter-Fraternity Sorority Council. He met the “love of his life” Mary, while working at Citizens Fidelity Bank. They married in July of 1957, before he was drafted into the United States Army. While stationed in Korea, one of his pleasures was playing the piano and organ at the local orphanage. After he returned home, John worked in Louisville at Whayne Supply Company as a Credit Manager. After recognizing his desire to be with people, he became a salesman for William J Laise Company. He excelled in sales and was subsequently hired by the President of R.E. Condit Company, where he worked and retired after 32 years. He achieved top sales awards, one of which afforded John and Mary a second honeymoon to Hawaii. John was a member of the Kiwanis Club and Past Master of the Crescent Hill Masonic Lodge #820 F&AM. He enjoyed several hobbies such as woodworking, gardening and became our jigsaw puzzle master. However, his greatest legacy was his family. He was never one to miss cheering a passion his children were pursuing, and then later celebrating his grandchildren's endeavors. John is preceded in death by his parents, his loving wife of 62 years Mary, and daughter Julie Ann Hein. He is survived by daughters Jill Broyles (Dennis), Joy Biggs (Jeff), Janet Hoard (Mark); son-in-law Steve Hein; eleven grandchildren and one great-grandchild. We would love to thank Dr. Montes and staff for their true compassion, care and guidance. Funeral Service will be 12 p.m. Wednesday, March 2, at Pearson's, 149 Breckenridge Lane with burial at Floydsburg Cemetery. Visitation 4-7 p.m., Tuesday, March 1 at Pearson's. Arrangements under the direction of Pearson's, "Where Louisville Goes To Remember".

John was born on January 8,1934 to H.H. & Olive Van Dyke in Louisville, Ky. He graduated from Eastern High School and later from Kentucky Wesleyan with a Bachelors Degree. He was President of Sigma Delta Fraternity and President of the Inter-Fraternity... View Obituary & Service Information

The family of John Thomas Van Dyke created this Life Tributes page to make it easy to share your memories.