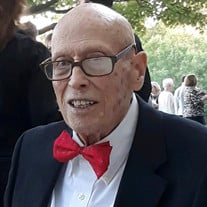 John G. Treitz Sr. Beloved husband and father died peacefully just two weeks shy of his 100th birthday after a brief illness on January 11, 2020. John was born January 25, 1920 in Louisville. He graduated cum laude from Male High School in its 1937 ½ class where he was a distinguished ROTC cadet. He served in the US Army Air Corps during World War II as a P-47 fighter pilot in England. He was promoted to the rank of Captain and awarded the Distinguished Flying Cross with Oak Leaf Cluster and Air Medal with four Oak Leaf Clusters for combat service. Upon discharge he rejoined a family business that grew into a highway construction contractor, John Treitz & Sons, and then became a real estate developer. Favorite major projects included a portion of I-64, Doe Valley Lake Dam, Mockingbird Gardens and Spring Mill subdivisions, Lexington and Danville airports, Bluegrass Mobile Home Park, and many baby boomer Jefferson County School sites. He is a member of Second Presbyterian Church. Family, Country, and God were the cornerstones of his life – his devotion to each was unreserved. He served as an inspiration and role model to all who knew him. John always stated that he had lived a wonderful, charmed life with a guardian angel as a co-pilot. He wanted to be sure that social security would be available to future generations so he worked six days a week and paid the tax until 1 ½ years before his death. He is preceded in death by his parents John E. and Palmetta W. Treitz, his sisters Palmetta T. Crutcher (Phil) and Dorothy T. Hibbitt (Conrad), and his brother Richard H. Treitz Sr. (Betty). He is survived by his cherished wife of 77 years Jean Lee Barnhill Treitz, his devoted children John G. Treitz, Jr. (Susan dec.), Jean Lee Treitz, and R. Gregory Treitz (Harriet), grandsons Rev. Jesse W. Lebus (Meredith), Morgan V. Lebus (Hanne), Jeffrey W. Treitz, Zachary B. Treitz, Gregory C. Treitz, and Boone C. Treitz, four beautiful great-granddaughters, and nieces and nephew. Special thanks and appreciation to Carmelita Clay and her staff for their care giving. Funeral service will be at noon Wednesday January 15, 2020 at Second Presbyterian Church, 3701 Old Brownsboro Road, with visitation starting at the church at 10:30. Burial will follow at Cave Hill Cemetery. Expressions of sympathy may be considered for the Susan Williams Treitz Memorial Fund at St. Francis School, Salvation Army, or a charity of choice. Friends may share thoughts and fond memories with the family at www.pearsonfuneralhome.com

The family of John G. Treitz Sr. created this Life Tributes page to make it easy to share your memories.

Send flowers to the Treitz family.