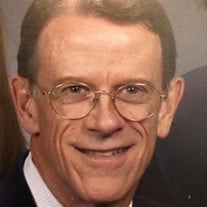 John Squires Reed II died on July 9, 2021, surrounded by family after a long battle with Progressive Supranuclear Palsy. Born March 20, 1949 in Frankfort to Mary O'Hara and John Squires Reed, he was an Eagle Scout and swam for Franklin County High School, where he graduated Valedictorian in 1967. At the University of Kentucky, he majored in political science, lettered in swimming, played water polo, participated in ROTC and graduated Phi Beta Kappa in 1971. John earned his law degree from the University of Virginia (1974) where a random good deed, helping a fellow student he did not know move into her apartment, led to a party invitation the next week, a party where he met Nancy Claire Battles, a young college student from New Jersey. Nancy and John were married in December 1973 and returned to Kentucky in 1974 following a brief stint at Fort Gordon, Georgia for John's basic training as a military police officer. John began his distinguished law practice at Greenebaum Doll Matthews & Boone (later Greenebaum Doll & McDonald), becoming a partner before leaving in 1987 to be a founding partner of Hirn Reed Harper & Eisinger (later Hirn Reed Doheny) and then Reed Weitkamp Schell & Vice in 1997, the firm from which he retired in 2018. Through the years he mentored, with kindness and constant support, many young attorneys who went on to establish their own successful law practices and careers on the state and federal bench. John held himself and those around him to the highest professional standards and was ever devoted to his many clients, local, national and international. He earned the profession's highest rating (AV Preeminent), was recognized by several leading publications as a "super lawyer" and was a longtime member of The Law Club. John served as a Special Justice of the Kentucky Supreme Court and gave back to his profession through years of service to the Louisville Bar Association ( President 1992). Service and leadership were a constant thread in John's life. He was on the governing boards of Leadership Louisville, National Association for Community Leadership (Chairman 1991), Center for Interfaith Relations, Leadership USA, Inc. (Chairman 1997), Partnership for a Compassionate Louisville, and Louisville Collegiate School (nine years). He was a Kentucky Colonel, a Bingham Fellow (2005) and ordained as an elder at Highland Presbyterian Church, where he served for many years. An avid sportsman, John belonged to the Louisville Boat Club, Valhalla and Churchill Downs Turf Club. The latter gave him the opportunity to be an enthusiastic supporter and ambassador for Kentucky thoroughbred racing. Family and friends were John's true focus. A talented photographer, John spent over 25 years as the unofficial photographer for his children's sports activities and theatrical performances, including the Louisville Boat Club and Lakeside swim teams, Collegiate field hockey, soccer and lacrosse, Manual field hockey, and Centre College lacrosse. He rarely missed a game day or performance for Ali or Jay. John easily made and faithfully kept friends, maintaining correspondence with his friends from high school, professional and civic involvement, as well as interesting people he met in his travels over the years. He was proud of his Irish heritage, shared with Nancy, and he relished their regular trips to Ireland. John loved a good conversation on a wide variety of topics and in later years would email friends articles and book reviews he thought they would find of interest. Wit and laughter were always part of any time you spent with John. John is survived by Nancy, his wife of 47 years, their children Ali and Jay (partner Meg) and his brother, Jim (Mary). Visitation will be at Pearson's, 149 Breckenridge Lane, Friday, July 23 from 4:00 to 7:00 with the funeral service at Highland Presbyterian Church, Saturday, July 24,2021 at 11:00. Masks are required at the church. Interment at Cave Hill will be private. The family would like to thank the dedicated caregivers and staff from Home Instead and Hosparus of Louisville for the care and support they provided. In keeping with John's life, he has donated his brain for research at the Mayo Clinic where he was treated for PSP. Memorial donations can be made to the Leadership Louisville Foundation, Center for Interfaith Relations or Highland Presbyterian Church.

John Squires Reed II died on July 9, 2021, surrounded by family after a long battle with Progressive Supranuclear Palsy. Born March 20, 1949 in Frankfort to Mary O'Hara and John Squires Reed, he was an Eagle Scout and swam for Franklin County... View Obituary & Service Information

The family of John Squires Reed II created this Life Tributes page to make it easy to share your memories.

Send flowers to the Reed family.