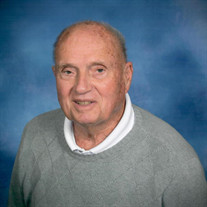 John R Carpenter, Jr., known as “Jack”, passed away peacefully October 9, 2020, only nine days after celebrating his 90th birthday. He had been diagnosed with the coronavirus just one week before. He was preceded in death by his wife, Diane, and his parents, John R. and Marie H. Carpenter. Jack was born October 1, 1930 and lived his entire life in Louisville. He was a 1948 graduate of Louisville Male High School where he played on the golf team and won the Junior Falls Cities at age 17. From there he went on to play college golf at the University of Louisville. Jack graduated in 1952 with a BS in Economics. He was a member of Phi Kappa Tau Fraternity. From 1952 to 1954 he served in the US Army and he always loved his country. While serving, he married the love of his life, Diane Rinehart. They were married for 60 years before her passing in 2014. Professionally, Jack built houses. From 1954 to 1985 he joined with his father and brother as the John R. Carpenter Company, building hundreds of homes and developing neighborhoods in Louisville, including Moorgate and Douglass Hills. Jack developed great relationships with all of the people involved in the business: tradespeople, suppliers, and clients. People in the building business admired the excellence of his work and relied on his integrity. Jack also was a principal with Brown & Carpenter Company where he worked with his friend and cousin-by-marriage, Rusty Brown. Golf continued to be a passion for Jack throughout his life. He was a part owner of Midland Trail Golf Club and served as president for 23 years. In 2017 the road to enter Midland was named John Carpenter Way after Jack and his father. He was a charter member of Hurstbourne Country Club and “Lefty Jack” could often be found on the practice range hitting balls, talking with golf buddies, and mentoring young golfers. For many years Jack and Diane worshiped at Beargrass Christian Church and enjoyed their involvement in the Friendship Sunday School Class. After Diane’s death in 2014, Jack moved to The Forum at Brookside, a retirement community, where he enjoyed seeing old friends and making new ones. In 2019 he moved to The Legacy at English Station where he was cared for with great compassion. At both The Forum and The Legacy he enjoyed the companionship of Ethel Grinstead. Jack would say the best part of his life was having four lovely daughters and a loving wife, all who affectionately called him Honey. He was encouraging, patient, kind and generous. Jack is survived by his brother Jim Carpenter (Gloria) and his four daughters: Kathy Brooks (George), Debbie Galloway (Ed), Sherry Leavell (Bill), and Julie Ensor (Clyde); and his 11 grandchildren, Callie Picardo (Rosario), John Brooks (Laura), Maggie Galloway (Nate), Jack Galloway, Mary Galloway, Laura Fincher (Stephen), Amy Cooper (Philip), Belle Ensor, Sara Ensor, Molly Ensor and Katie Ensor; six great granddaughters and one great grandson. Due to Covid, the family will hold a private graveside service and celebration of his life. In lieu of flowers, a gift in honor of Jack can be made to Beargrass Christian Church.

John R Carpenter, Jr., known as &#8220;Jack&#8221;, passed away peacefully October 9, 2020, only nine days after celebrating his 90th birthday. He had been diagnosed with the coronavirus just one week before. He was preceded in death by his... View Obituary & Service Information

The family of John "Jack" R. Carpenter Jr. created this Life Tributes page to make it easy to share your memories.

Send flowers to the Carpenter family.