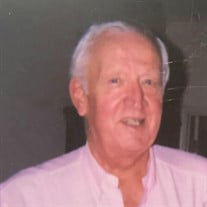 John Foster Brewer of Louisville, KY, and Naples, FL, passed away on February 9, 2021, in Naples, at the age of 85. John was born in Louisville on August 21, 1935, and grew up in Anchorage, KY, where he attended Eastern High School, graduating in 1953, and earning Courier-Journal All-State Basketball honors. After graduating from Eastern, John signed with the University of Kentucky, where he played for the Wildcats under Adolph Rupp from 1954-1957. He was the only player in UK basketball history to wear the number 70. Upon graduation from UK, John enlisted in the United States Marine Corps and was stationed in Quantico, VA, where he continued his athletic career with the Marine Corps Basketball Team. He served honorably until his discharge in 1960, having achieved the rank of Second Lieutenant. After discharge, John received, but declined, an offer to try out for the New York Knicks. He returned to Louisville with his young family and began his career in the aluminum business; first with Anaconda Aluminum in Louisville, Chicago, Dallas and Cleveland, and later with Metal Exchange Corporation in St. Louis, from which he retired as Vice President of Sales in 2007. An accomplished golfer, John was also a member of Big Springs Country Club in Louisville, Old Warson Country Club in St. Louis, and Collier’s Reserve Country Club in Naples. He was the son of the late Silas Herbert Brewer and Christine Meguiar Brewer, of Anchorage, KY, and was predeceased by his first wife, Susan (Roach) Brewer Paxton, and his son John Foster Brewer, Jr. Those left to celebrate his life include his partner in all things, Blanche Kitchen; his brother, Silas Herbert Brewer, Jr. (Charlotte) of Walton, KY; his children, John Foster (Jay) Brewer, III (Cindy) of Louisville; David Miles Brewer (Ramona) of Oneonta, AL; and Lucy Elliott Brewer Waters (Richard) of Atlanta. He was also blessed with his granddaughter, Mary Meguiar Brewer, of Oneonta, AL, as well as extended family and countless friends. Interment will take place February 23, 2021, at Cave Hill Cemetery in Louisville. The gathering will be private. A celebration of his life will be held at an appropriate time. The family extends their sincere gratitude to Lori Warf at Pearson’s Funeral Home, 149 Breckenridge Lane, Louisville, for her incredible thoughtfulness and exceptional guidance throughout this difficult time. In lieu of flowers, please consider a donation to Dare to Care Food Bank or The American Heart Association.

John Foster Brewer of Louisville, KY, and Naples, FL, passed away on February 9, 2021, in Naples, at the age of 85. John was born in Louisville on August 21, 1935, and grew up in Anchorage, KY, where he attended Eastern High School, graduating... View Obituary & Service Information

The family of John Foster Brewer created this Life Tributes page to make it easy to share your memories.

Send flowers to the Brewer family.