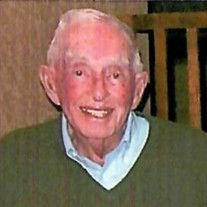 John R. (“Jack”) Adams, 90 of Louisville, passed away peacefully at home on Wednesday, April 22, 2020 with Family at his side. He was born in Youngstown Ohio, December 27, 1929 the son of Marie and Herman Adams. Jack graduated from Kent Ohio High School in 1947 and Kent State University in 1951. He graduated with a BA Degree in Transportation and was a member of Delta Upsilon Fraternity at Kent State. After graduation he was commissioned as an Ensign on the USS Leyte Aircraft Carrier earning the rank of Lieutenant JG during the Korean War. Jack then began his successful business career in Transportation and Insurance with Dixie Ohio Express and Heritage Insurance Company spanning 60 years, taking him to Akron and Columbus Ohio, to Atlanta Georgia, and to Louisville. He was an integral part in developing the Trucking Division of Heritage Insurance. He was also recognized as a leader in the Trucking Insurance Business. Jack is preceded in death by his granddaughter Michelle Adams. He is survived by his loving wife of 68 years, Betty Culley Adams. He is also survived by sons, Tim (Jeanette), Kevin (Meg), Mark (Laurie), Kelly (Lea Ann), Dennis, Tom, daughter Tracy (Bill Neuenschwander); seven grandchildren, Jennifer (Stephen), Chelsea, Sarah (Rodney), Hannah, Paul, Ann, and Greg; and two great grandsons, Camden and Parker, and other extended family and friends. Jack and Betty were avid golfers, bowlers, and bridge players. They were longtime members of St. Albert the Great Catholic Church and Hunting Creek Country Club. Out of respect and concern for public health all services will be private. Arrangements under the direction of Pearson's. A celebration of Jack’s life will be held at a later time. Memorial gifts may be made to St. Albert the Great or the charity of your choice.

The family of John R. ("Jack") Adams created this Life Tributes page to make it easy to share your memories.

Send flowers to the Adams family.