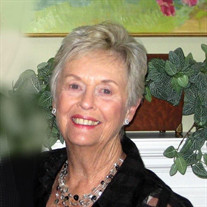 Joanne “Sparkie” Alexander Sparks Gutermuth Buese, 90, entered heaven on September 25, 2020. Born in Lexington, KY, her family attended the Methodist Church where she became a Christian. After graduating from Lafayette High School, she attended Brenau College in Gainesville, GA, where she majored in Art, joined the Tri Delta Sorority, and competed on its collegiate diving team. She transferred to the University of Kentucky at the beginning of her junior year where she continued her Tri Delta Sorority membership and met the love of her life, John “Jack” Walter Gutermuth. As the story goes, when Joanne called Jack’s Delta Fraternity to invite him to a Sadie Hawkins dance, Jack nicked his face shaving out of excitement when he found out that she was on the phone! After dating for a year, Jack asked for Joanne’s father’s permission for her hand in marriage, but he was turned down because they were too young. Fortunately, after several months, Joanne’s father changed his mind seeing how much they were in love. This inspired Joanne to stay in Kentucky and to turn down her modeling opportunity in New York City! Finally, Jack and Joanne moved to Louisville where they enjoyed over 50 years of marriage and gave birth to their four children. During Joanne’s life, she achieved many notable accomplishments. During her time at Calvin Presbyterian Church, she served as the Director of Christian Education, the women’s circle leader, a deacon, and an elder. Later, she attended Broadway Baptist Church where she enjoyed attending Sunday School and serving as the women’s circle leader. Outside of church, Mom loved attending Community Bible Study with her late sister-n-law, Suzanne Wright. She also opened Alexander’s Lotions and Potions in Lexington, KY, with her husband and sister, Judi Bingham, and enjoyed selling luxury body products and perfumes. After selling the store, Joanne worked at Glascock’s Boutique with some of her dear friends. In her leisure time, Joanne loved creating still-life and abstract paintings all the way up into her 80’s. When she wasn’t painting, Joanne could be found playing tennis with family and friends and watching all the major grand slam tennis tournaments. As an avid Wildcat fan, she enjoyed cheering on her favorite University of Kentucky basketball and football teams. She also enjoyed traveling and took numerous family trips to Hilton Head Island, Kiawah Island, Chicago, California, and to Florida. Visiting and traveling with Joanne and Jack’s lifelong marriage friends Marguerite and Frank Owens, whom they met on their honeymoon, provided more than 70 years of happy memories. After Jack’s passing, Joanne took trips to Italy with her sister and a trip to London and Paris with her late second husband, Richard Buese. Most of all, Mom’s greatest joy was spending time with her family and friends. We will always remember Joanne’s fun-loving disposition with her dignified persona. As a bright and wise woman, she loved to learn about everything and especially about other people. Her optimistic approach to life, her beautiful smile, and her ability to turn the conversation away from “unpleasantries” touched the lives of all who knew her. She was a true class act! Joanne is survived by her four children: Gail Fitzpatrick (her husband Michael), Beverly Levy (her husband Richard Levy), Steve Gutermuth, and Lucianne Gutermuth; her four grandchildren: Lauren Wilson (her husband Andrew Wilson), Emily Levy, Allie Gutermuth, and Jack Gutermuth; her great grandson: Henry Wilson; her sister: Judi Bingham (her husband Barry); her nephew: Brian Pulito (his wife Cindy and their children: Kelsey, Oliver, and Sophie). In lieu of flowers, contributions can be made to Broadway Baptist Church (4000 Brownsboro Rd., Louisville, KY 40207) or to a charity of the donor’s choosing. Funeral services were held on Wednesday, September 30th. A special thank you to the outstanding nursing staff at Baptist Health Louisville Palliative Care Unit and to the Hosparus Care Unit who provided much love and comfort.

Send comfort to the Gutermuth family when it's needed most

Send flowers to the Gutermuth family.