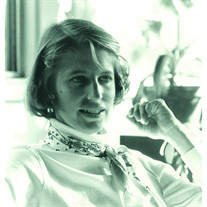 Joanne Lei Will Tafel Oldham passed after a long struggle with Alzheimer’s. She is survived by her sons and their spouses: Edward Collins Oldham and Jennifer Deluca Oldham, Joseph Will Oldham and Elsa Hansen Oldham and Paul Tafel Oldham and Amber Luna Oldham; her grandchildren Adela Mae Oldham, Samuel Will Oldham and Poppy Jo Oldham; and also by her siblings, James Edward Tafel, Thomas Martin Tafel and Teresa Tafel Wells. Joanne was born at Hickham Field in Honolulu, Hawaii on May 1, 1942. Her mother, Anne Ferrero, was a nurse and her father, Joe Will, was an Army pilot. After WWII, her family, now with her younger brother Joe “Whipper” Will, moved to a series of Army bases, finally at Roswell, New Mexico, where her father died when an overloaded transport that crashed shortly after takeoff. Her mother remarried Paul Tafel, who adopted Joanne and her brother, and settled in Louisville, where she graduated from Collegiate High School.She attended Manhattanville College for two years, spending one semester at the Institut Catholique in Paris, and completed her college degree at the University of Louisville. In 1964 she married Joseph Collins Oldham. She taught French at Sacred Heart Academy and St. James Academy, but stopped working to care for her growing family. She was an avid supporter of Actors Theatre of Louisville. In the 1980s, she pursued graduate studies in religion and psychology, and in 2005, she completed an MFA in Creative Nonfiction at Spalding University. Her artwork appears on several of her son Will’s records, and her collage-based pieces were featured in a show at Family gallery in Los Angeles. She endured many losses, including her father, her brothers Whipper, who died in a motorcycle accident in 1968, and P.T., who was struck by a car in 1967, and her husband Joe, who died unexpectedly of a heart attack in 2006. She had many friends, and has been missed for many years as her dementia eclipsed her presence. We will now try to rebuild our memories of Joanne. The family would like to express its gratitude to the many skilled and loyal caregivers who spent their time and expertise with Joanne. Memorial service will be held at 3 p.m. on Saturday, January 25, 2020 at Pearson’s, 149 Breckenridge Lane. Visitation will be from 1 p.m. until time of the service. Burial will be private in Cave Hill Cemetery. Attendants are asked to bring pictures and/or stories to share. In lieu of flowers, the family would like to ask friends and family to make a donation in Joanne’s name to a charity of their choice.

Joanne Lei Will Tafel Oldham passed after a long struggle with Alzheimer&#8217;s. She is survived by her sons and their spouses: Edward Collins Oldham and Jennifer Deluca Oldham, Joseph Will Oldham and Elsa Hansen Oldham and Paul Tafel Oldham... View Obituary & Service Information

The family of Joanne Lei Will Tafel Oldham created this Life Tributes page to make it easy to share your memories.

Joanne Lei Will Tafel Oldham passed after a long struggle with...

Send flowers to the Oldham family.