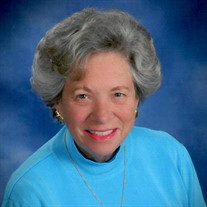 Joan Thomas Ruby died June 21, 2019 at her home. Joan, the former Joan Tyler Thomas, was born August 7, 1936 in Louisville, Kentucky, the eldest child of the late Elizabeth Catherine (nee) Lewis and John “Jack” Tyler Thomas, Sr. Following graduation from Eastern High School in Louisville, Joan continued her education at Sullins College in Bristol, Virginia and the University of Kentucky. She was an avid UK fan and shared her allegiance and enthusiasm with her many friends who bleed blue. Joan taught at Virginia Chance Elementary School for several years and she delighted in the many years she worked at Rita and Peggy’s Choices in St. Matthews. She was a member of Second Presbyterian Church, Louisville Boat Club, Junior League of Louisville and a former member of The Younger Woman’s Club of Louisville and The Woman’s Club of Louisville. She volunteered countless hours at The Cabbage Patch Settlement House. She was an equestrian beginning at the age of four. She enjoyed bugling with friends and loved thoroughbred and saddlebred horses. She was even in a syndicate, a proud co-owner of three-year-old Snappy Little Cat that actually won a few races. Joan played bridge with her lady friends, she enjoyed a good competitive game of tennis and spending quality time with her abundance of friends. Many times, Joan would stop by a friend’s house with a thoughtful gift that Joan thought that person would enjoy. She was an active cheerleader in her grandchildren’s activities. Seldom did she miss a locrosse game, a basketball game, school play or an activity in which one of her five grandchildren participated. Her farm in La Grange was a place of constant activity. Children, grandchildren and friends were always welcome whether it was for a meal, a swimming party or one of her fabulous country Christmas parties where she hosted the gathering donned in her best Mrs. Claus garb. Her revered Golden Retriever, Judge, served as her co-host. Joan was a giving and caring person who was always surrounded by those she held dear. Joan was a devoted mother and grandmother who profoundly cherished her family. She is survived by her children: Joanie Graham Krupp, Sara Ruby Smith and Beau Ruby; her grandchildren: Hunter Thomas Graham, James Tyler Graham (Elizabeth), Courtenay Elizabeth Graham, Jack Ryan Smith and Elizabeth “Libby” Smith, and her brother Tyler Thomas (Jeannie), her close friend, Lacy Sheckles, her aunt, Ann Lewis and too many friends to mention. She will be sorely missed by all who had the good fortune to have Joan Ruby in their lives. Visitation will be Tuesday, June 25, in the Narthex of Second Presbyterian Church, 3701 Old Brownsboro Road, Louisville, KY 40207, beginning at 10:30 a.m. with the funeral to follow in the Sanctuary at noon. Interment will be at Cave Hill Cemetery followed by a celebration of Joan’s life at the Louisville Boat Club. Memorial gifts may be sent to GRRAND, P.O.Box 6132, Louisville, KY 40206 or Second Stride, 7204 Hwy 329, Crestwood, KY 40014. Pearson’s, 149 Breckenridge Lane, is entrusted with arrangements.

The family of Joan Thomas Ruby created this Life Tributes page to make it easy to share your memories.

Send flowers to the Ruby family.