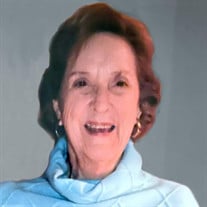 LOUISVILLE - Joan “Kami” Kamman, 91, passed away peacefully early Monday, December 6, 2021. Joan, daughter of Hulin and Mary Mattingly, was born November 10, 1930, in Owensboro but grew up in Danville, Kentucky. After graduating in June 1953 from Centre College, Joan met and quickly fell in love with Bob Kamman. They were married that following December! Joan taught third grade at St. Peter and Paul school in Danville, until she devoted herself to being a full-time wife and mother with the arrival of their children, Ann, Bill and Jane. A job change for Bob moved the young family to Louisville in 1955. Their children were always their top priority, and “Kami and Pops” were thrilled with the eventual arrival of grandchildren and great-grandchildren. Joan and Bob lived a very full and active social life. They truly loved their family and many friends, traveling in their motor home, and entertaining, especially through the holidays. Joan was a member of Holy Trinity and St. Albert the Great parishes. She was a member of the Fillies, Younger Woman’s Club, Woman’s Club of Louisville, and the Louisville Boat Club. She was also an avid bridge player. Joan was preceded in death by her parents; her husband, Bob; and her brother, Joe Mattingly of Danville. She is survived by her adoring children and their spouses: Ann and David Russo, Bill and Stacie Kamman, Jane and Gregg Stauble; her loving grandchildren: Matthew Russo, Elisabeth and Chris Cassady, Jennifer and Evan Dupree, Melissa and Andrew Cotton, Michael and Jen Russo; and her precious great grandchildren, Courtenay and Logan Dupree; Henry and Lucy Cotton; and Case and Hawley Cassady; her dear brother Charlie Mattingly, as well as her nieces and nephews. Special appreciation to her many devoted caregivers she was so fond of at Magnolia Springs Louisville, Memory Way. Her Funeral Mass will be celebrated 10:00 AM Friday, December 10, 2021 at St. Albert the Great Catholic Church 1395 Girard Drive. Burial will be next to “Pops” at Cave Hill Cemetery. Visitation will be 2:00 – 7:00 PM Thursday at Pearson’s 149 Breckenridge Lane. In lieu of flowers, Joan’s family requests memorial donations to Hosparus of Louisville or the Alzheimer’s Association. Joan Mattingly Kamman Arrangements under the direction of Pearson's, "Where Louisville Goes to Remember".

The family of Joan Mattingly Kamman created this Life Tributes page to make it easy to share your memories.

Send flowers to the Kamman family.