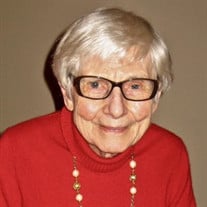 Joan Rosamund Bassett, 96, of Louisville passed away peacefully Saturday, March 9, 2019 at the Episcopal Church Home. She was born in England and grew up in Tianjin, China where her father had a business. She attended the British School in China. During World War II, she was interned by the Japanese in Weihsien, China. It was there that she married her husband of 58 years, Thomas Russell Bassett. After the war, they lived in California, in Venezuela and Costa Rica, before settling in Louisville in 1961. She lived in Rolling Fields until 2010 before moving to Cornell Trace and then Parr's at Springhurst Pines. She was a positive force who brightened the lives of those she met. She loved learning, reading, writing, gardening, playing bridge, sewing, and sailing. She was a member of St. Thomas Episcopal Church and a former member of St. Francis in the Fields Episcopal Church, the Woman’s Club of Louisville, several reading clubs, including the Monday Afternoon Club, Great Books, and Little Books. She was a member of the Louisville Sailing Club, the Cruising Club of Louisville and a lifetime member of the Patoka Lake Sailing Club in Indiana. She was also a member of the English Speaking Union. She was preceded in death by her husband Thomas in 2004. She is survived by daughters, Hilary Bassett of Portland, ME, and Sheila Bassett of Potomac, MD. A memorial service will be held on Saturday, April 6, 2019 at St. Thomas Episcopal Church, 9616 Westport Road, with a concert at 10:30 am, church service at 11 am followed at 12:30 by a reception and celebration of her life at the parish hall next door. Memorial gifts may be made to Yew Dell Gardens, the Louisville Orchestra or the donor's favorite charity.

Joan Rosamund Bassett, 96, of Louisville passed away peacefully Saturday, March 9, 2019 at the Episcopal Church Home. She was born in England and grew up in Tianjin, China where her father had a business. She attended the British School in... View Obituary & Service Information

The family of Joan Rosamund Bassett created this Life Tributes page to make it easy to share your memories.

Send flowers to the Bassett family.