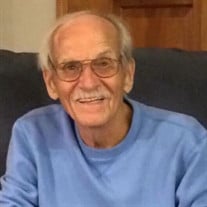 Jimmie Eugene York, 87, passed away peacefully on February 7, 2022 from health complications due to age related causes. He kept his witty, pragmatic, and amazing nature until the end. Jim was born November 4, 1934, in Albany, Kentucky. He was preceded in death by his wife, Linda Beck York, his parents, Jasper Earl York, and Cytha Leveredge York; and all five of his siblings – Evelyn (Paul), Luther (Ruth) Wesley, Walteen (Joe), Howard (Ruth) and Father and Mother-in-law Lowell and Mary Etta Beck. He is survived by his daughters whom he adored and who adored him– Tonya York and Tammy York Day and beloved son-in-law, Alex Day. He also leaves behind to cherish his memory many dear nieces and nephews; brother and sisters-in-law, including Don and Sue Beck, Janette Barber (Ken) and Betty Thurston (John), cousins, and friends. He leaves behind many friends including his best friend I.B. Jenkins, with whom he enjoyed a 67-year friendship; life-long friend Preston Bell, friends and neighbors Gary and Brenda Collins; his GE family, Tonya and Tammy’s friends who became his friends as well, and many, many more. Jim was wickedly intelligent, so much so that he was advanced 3 grades and graduated from Clinton County High School at age 15 in 1950. “Sgt York” served in the U.S. Army from 1956 to 1958 and was in Korea for a period of time. Jim had a strong work ethic, and he was honored for perfect attendance for every year of his 37-year career with General Electric. While working for GE and supporting his family he attended college and obtained a business degree. Jim was a Christian and supported multiple denominations and most recently was a member of Parkland Baptist Church. Jim was a lifelong lover of music and when he was young, he performed on The Grand Ole Opry and recorded a single. Jim and Linda, with many friends and family, attended music shows and festivals both locally and across the nation. He especially enjoyed Bluegrass Music. He was a huge sports fan – specifically college basketball – and LOVED his Kentucky Wildcats! Out of love for his daughters, later in life he half-heartedly cheered on the Louisville Cardinals as well, especially the Lady Cards. He drew the line at Tammy’s alma mater Duke though. He had a wonderful, warm, and engaging personality and quick sense of wit and always had a funny comeback or comment. His mind was razor sharp to the end, and he loved researching and debating. Those who knew him learned to hesitate before challenging him on even sometimes random subjects, as he most usually was proven right! He loved to read, tell stories, and sit for a spell on his front porch (or someone else’s) talking with folks and shooting the breeze. The family loved watching Jeopardy together and kept the tradition alive after Linda passed away, with Tuesday night designated as a sacred “Jeopardy Night with Dad”. Although initially drug kicking and screaming into technology and social media, he learned quickly, embraced his iPad and iWatch and loved Facebook. Anyone receiving his texts has experienced his properly -- and hilariously – placed emoji for emphasis. Jim supported numerous charitable causes. Donations in his honor may be made to: Unbridled Charitable Foundation PO BOX 7331 Louisville KY 40257 https://one.bidpal.net/unbridledeve2022/browse/donation ; with requested designation to The Salvation Army https://www.salvationarmy.org/ ; The Kentucky Humane Society https://www.kyhumane.org/donate/ or Trooper Island in his native Albany, KY. https://trooper-island.square.site/ Visitation will be this Thursday, February 10, 2022 at Pearson’s Funeral Home, 149 Breckenridge Lane from 12 noon to 6:30pm. A brief Celebration of Life will follow in Pearson’s Chapel at 7pm that evening. A Graveside service will take place this Spring in Albany, KY (future date to be announced) where he will be laid to rest next to his beloved wife Linda. Arrangements under the direction of Pearson's, "Where Louisville Goes To Remember."

Jimmie Eugene York, 87, passed away peacefully on February 7, 2022 from health complications due to age related causes. He kept his witty, pragmatic, and amazing nature until the end. Jim was born November 4, 1934, in Albany, Kentucky. He... View Obituary & Service Information

The family of Jimmie Eugene York created this Life Tributes page to make it easy to share your memories.

Send flowers to the York family.