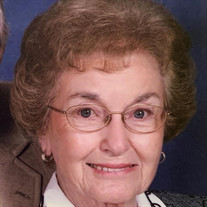 Jeri Polly Blair, 95, passed away peacefully on Tuesday, December 15th, 2020. Jeri graduated from Whitesburg High School, Whitesburg, KY and attended Pikeville College. She spent her younger years working at the Bank of Whitesburg and fulfilling secretarial roles for local doctors, after moving to Louisville. She was a member of Trinity Presbyterian Church, where she participated in Women’s Circle for many years. Jeri loved to play bridge with close friends and spend quality time with her siblings. Any caretaker that entered her room, left feeling like they were a new friend and part of her family. She is preceded in death by her husband of 66 years, Jack Warren Blair, her parents John H. Polly and Hattie Gibson Polly, and brother Beryl Polly. Jeri is survived by two sons, Mark (Sharon) Blair and Mike (Anna Helm) Blair; four grandchildren, Brooks (Katey) Blair, Laura (Travis) Donald, Eric (MeriCate) Blair, and Jonathan Blair (Lily); four great- granddaughters, Frances Blair, Virginia Blair, Betsy Blair and Blair Donald; two brothers, Glen (Nona) Polly, Ralph (Wilma) Polly; one sister, Norma Collins; sister-in-law, Willie Mae Polly; and several nieces and nephews. Due to challenging times, funeral services will be for family only. Services will be held at noon on Saturday at Pearson’s, 149 Breckenridge Lane, with burial at Cave Hill Cemetery. Expressions of sympathy may be made in Jeri’s honor to Hosparus Health of Louisville, 3532 Ephraim McDowell Dr, Louisville, KY 40205. The family would like to thank Jeri’s caregivers, from Hosparus of Louisville and Springhurst Health and Rehab, for the love and care they provided her. We are truly grateful.

The family of Jeri Polly Blair created this Life Tributes page to make it easy to share your memories.

Send flowers to the Blair family.