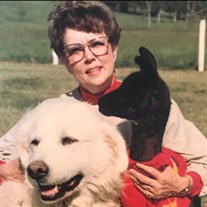 Jeannette Brooks Priebe July 4, 1937 – May 30, 2020 With loving family by her side, Jeannette Brooks Priebe passed away on May 30, 2020, in Louisville. She was 82. Katherine Jeannette Brooks was born on July 4, 1937, in Memphis, Tennessee. The middle child of Alonzo Hall Brooks and Katherine Blalock Brooks, Jeannette grew up in Bolivar, Tennessee, with big brother J. Hall Brooks and little sister Joanne Brooks Johnson. Her parents were longtime active members at First Baptist Church in Bolivar, so Jeannette’s faith journey was rooted in her early childhood. Jeannette’s early and teenage years were busy with some of her favorite activities, including studying piano and organ, becoming an excellent cook, and collecting animals whenever possible. Her mother Katherine was well-known in the community for her expertise in raising over 30 varieties of exotic birds. Jeannette, however, preferred dogs, multiple cats and kittens, and even raised an orphaned squirrel, who enjoyed chewing on piano keys and the fingers of her sister’s dolls. Jeannette’s work experiences started at a young age, too. In high school she did bookkeeping for her father’s business, Brooks Auto Service. After marrying and attending Union University in Jackson, Tennessee, she and her young family moved to Louisville where she worked as a secretary and eventually moved into personnel work at Anaconda Aluminum. She served as Administrator at Extendicare-Northfield, and worked in job placement for Action Now and Jobs Now. She was hired as the first female Personnel Director of the Louisville Civil Service Board in 1974. In 1978 she was hired by then-County Judge Executive Mitch McConnell to serve as the Jefferson County Personnel Director. Along the way, Jeannette served on local boards including the Louisville Zoological Commission and was elected the first female President of the Louisville Personnel Association. Jeannette left her position with Jefferson County government so that she and her husband Vic, whom she married in 1973, could work together in private business management until they semi-retired. Their shared love for animals led to their “hobby” of raising llamas. They also enjoyed the beauty and serenity of farm life. Their children and grandchildren remember with fondness family meals together, where goats, llamas, geese, ducks, dogs and cats provided outdoor entertainment. The meals were prepared lovingly by Jeannette who had a knack for cooking great Southern fare for family and friends. When Vic heeded the call to return to his Pastoral service roots by serving as Interim Minister at Presbyterian Churches in Kentucky and in Kingsport, Tennessee, Jeannette enthusiastically found her calling as Pastor’s Wife, Sunday School teacher to youth and to adults, and numerous other roles within each Church family. She and Vic led spiritual retreats at Nazareth in Bardstown, St. Meinrad in Indiana, and at other places, and enjoyed sharing their love for scripture with long-time Church goers as well as newer Christians. Jeannette and Vic’s travels with children and grandchildren, to Europe, Canada, Washington, D.C., the American West, and to Sanibel Island, left family with warm memories and funny stories. Jeannette took up painting in her 60s and created beautiful oils on canvas highlighting many of the places she visited. Jeannette’s beloved husband Vic passed away in 2012. In addition to her parents, she is pre-deceased by her brother J. Hall Brooks. Her survivors are her cherished four “kids” – daughter Angie Schulte (Steve) of Louisville, son Michael Shearon (Debby), Louisville, stepsons Steve Priebe (Kelly), Prospect, and Phil Priebe (Heidi) of Fort Collins, Colorado; and her grandchildren, Kathleen Gilman (Kevin), Rebecca Harrison (Justin), Mark Priebe, Allison Priebe, Elizabeth Priebe, Anne Wesley Priebe, and Coy Priebe. Two little great-grandsons, Grant and Logan Gilman, enjoyed some very special times with their Gigi. Jeannette’s sister, Joanne Johnson, sister-in-law Anita Brooks, her cousins, and numerous nieces and nephews also survive her. Visitation will be held on Friday, June 5, from 4 until 8 pm at Pearson’s, 149 Breckenridge Lane, Louisville, Kentucky 40207. The family requests that those able to pay their respects wear masks and maintain social distancing while inside the funeral home. In accordance with Covid-19 restrictions, attendance will be permitted in limited numbers in the building. Jeannette’s memorial service and interment will be private. She will be laid to rest next to Vic at Pisgah Cemetery in Woodford County, Kentucky. Memorial gifts may be made to The Salvation Army, or to the charity of your choice. Arrangements made under the directions of Pearson’s.

The family of Jeannette Brooks Priebe created this Life Tributes page to make it easy to share your memories.

Send flowers to the Priebe family.