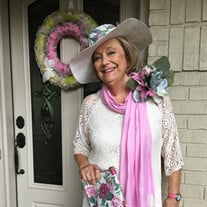 Jean Kirkpatrick Whyte Wilson Departed this earth to her Heavenly Father on January 20, 2020. She was a proud first-generation American citizen. She was preceded in death by her father, Horace Brittain Whyte, Northern Ireland and her mother, Ardella M. Lucas Whyte, Ontario, Canada. She also was preceded by her brother, James L Whyte. She had lots of cousins and enjoyed visiting them in the London, Ontario area and Northern Ireland. She was born in Grand Rapids, Ml. and a graduate of East Grand Rapids High School In 1957. She attended Wake Forest University and was graduated in 1961 with a bachelor's degree. She was a member of Second Presbyterian Church in Louisville where she served as a Stephen's Minister. She never met a holiday that she didn't like. Halloween, July 4th, Christmas, etc. her home was always decorated for the occasion on the in and outside. Jean loved cooking and entertaining folks in her home. Every Christmas, she made her famous Henry Bain's Sauce which she delighted in giving to friends and family. She was an avid bridge player and had won the Wake Forest Bridge Championship two years. She was a voracious reader, mostly mystery novels. At one time, Jean had all the Agatha Christi mysteries. She was a long-time member of Hurstbourne Country Club and in her younger years loved playing on the women's tennis teams. She liked traveling but her favorite place was her husband's hometown, Pineville, KY. She fell in love with the town and its citizens. Recently, she was made Honorary Mayor of the town of Pineville, an honor of which she was so proud. Her hobby in her later years was making jewelry, not for herself, but for others. The family would like to thank the Oncology Unit at Norton WC particularly Dr Williams, Brittany Ross and the 5th floor Oncology Care. She adored her children and grandchildren and is survived by her husband of 58 years, Edward Tyree Wilson. She is also survived by her son, Edward Brittain Wilson (wife Claire and children Cailin, Edward Milich and Eliza) and her daughter Lee Embry Wilson Campbell (husband Dr. Scott Campbell and children Lucas Edward and Sarah Ann.) Jeanie was a pet lover extraordinaire having more dogs and cats in her life that can be counted. The funeral service will be held at Second Presbyterian Church, 3701 Old Brownsboro Road, Loulsville, KY 40207 on Friday, January 24, 2020 at 1PM. Visitation and light luncheon will follow the service. The family requests that in lieu of flowers, a donation be made to the Kentucky Humane Society, 1000 Lyndon Lane, Ste B, Louisville, KY 40222 or a charity of choice.

Jean Kirkpatrick Whyte Wilson Departed this earth to her Heavenly Father on January 20, 2020. She was a proud first-generation American citizen. She was preceded in death by her father, Horace Brittain Whyte, Northern Ireland and her mother,... View Obituary & Service Information

The family of Jean Kirkpatrick Whyte Wilson created this Life Tributes page to make it easy to share your memories.

Jean Kirkpatrick Whyte Wilson
Departed this earth to her Heavenly...

Send flowers to the Wilson family.