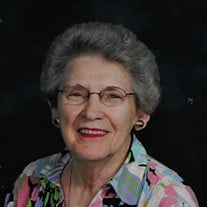 Jean Hunsinger Callaghan, 96, went peacefully to Heaven to be with Jesus from her home on March 29, 2021 at 1:15 pm with her youngest son by her side. She was born in Louisville on January 11, 1925. She adored her brother, Charles Hunsinger Jr., nicknamed Sunny, both the children of Charles and Dorothy Hunsinger, who grew up in a grey two-story house near Midlane Farm on Hikes Lane. As a descendent of two of Louisville’s oldest families, Hikes and Hunsinger, she often told stories about growing up in the country. She attended Hikes Grade School and graduated from Atherton (All Girls) High School, Class of 1942 and then went to the University of Kentucky for two years. She married Walter Lee Lacy on March 22, 1946 and Walter’s work led them to New Jersey and then to Fort Worth, Texas. Jean, with her youngest son, resettled in Louisville in 1970 and Jean married James D. Callaghan on May 1, 1971. Tragically, Jim was taken home to Heaven early by esophageal cancer on December 31, 1973. She started her own business in 1985 managing "The Giant Country Store" commercial exhibit area of the North American International Livestock Show at the Kentucky Exposition Center every November until her retirement at age 90. She is a longtime member of the St. Matthews Episcopal Church. Jean is survived by her sons, Walter Lee (Gena) Lacy III with grandson Brian Lacy living in Fort Worth, Texas, Todd (Anna Marie) Callaghan, with grandsons Cody (Andee, with greatgrandchildren Beckham & Blake), Austin (Delani), and Todd Junior; step-granddaughter, Tiffany (Brian) Noe; step-greatgrandchildren, Emma, Parker and Patrick. She is also survived by an (almost adopted) daughter and son, Kelli and Matt. She is preceded in death by brother Sunny, son Charles and granddaughter Sarah. The Celebration of Life service will be held Saturday May 8th at 2pm at Trinity Chapel, 8617 Whipps Mill, Louisville, Kentucky. There will be no visitation. A private burial will take place at Resthaven Cemetery. Instead of flowers, please make a gift to your favorite charity.

Jean Hunsinger Callaghan, 96, went peacefully to Heaven to be with Jesus from her home on March 29, 2021 at 1:15 pm with her youngest son by her side. She was born in Louisville on January 11, 1925. She adored her brother, Charles Hunsinger... View Obituary & Service Information

The family of Jean Hunsinger Callaghan created this Life Tributes page to make it easy to share your memories.

Jean Hunsinger Callaghan, 96, went peacefully to Heaven to be...

Send flowers to the Callaghan family.