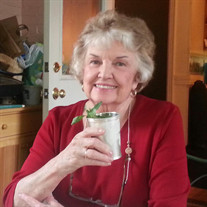 Jane McCord Robertson, born on April 10, 1933 in Richmond, Kentucky, passed away after a short illness at age 86 on April 13, 2019 in Louisville, Kentucky. Janey was the beloved wife of Bob Robertson, mother to John, Amy, and Rob Robertson, and grandmother to Andrew Robertson, Meredith Robertson, and Rylie Wallace. Janey graduated from Eastern Kentucky University where she studied art education and met the love of her life, Bob. She was an enthusiastic artist and multi-talented musician who sang beautifully, played dulcimer, claw-hammer banjo, harp, piano, penny whistle, concertina, ukulele, and guitar. Janey was best known for her countless contributions to the music community, including the Louisville Dulcimer Society, Kentucky Music Weekend, The Ohio Valley Gathering, and many aspects of the Louisville Arts community. Janey was an active member of the Louisville P.E.O., a loyal member of her book club, and a member of Harvey Browne Presbyterian Church. She was a good friend to many who knew her for her sincere social graces, her ability to bring people together, her humor and love for all that life could offer. Many knew Janey as the informal family historian, a masterful, creative cook, a great story-teller, an avid reader and lover of literature and cinema classics, a supporter of Louisville Public Media, Actors Theatre, and the arts community, the keeper of treasured family traditions, and the heartbeat of the Robertson family, she will be missed by many who’s lives she touched. Funeral services will be Thursday, 1:00 pm at Harvey Browne Presbyterian Church sanctuary, 311 Browns Lane, Louisville, KY 40207 with burial to follow at Cave Hill Cemetery. Friends and family can pay their respects at the visitation on Wednesday, April 17 from 4:00 to 8:00 p.m. at Pearson's Funeral Home, 149 Breckenridge Lane, Louisville, KY 40207. In lieu of flowers, consider a donation to Louisville Public Media.

Jane McCord Robertson, born on April 10, 1933 in Richmond, Kentucky, passed away after a short illness at age 86 on April 13, 2019 in Louisville, Kentucky. Janey was the beloved wife of Bob Robertson, mother to John, Amy, and Rob Robertson,... View Obituary & Service Information

The family of Jane McCord Robertson created this Life Tributes page to make it easy to share your memories.

Send flowers to the Robertson family.