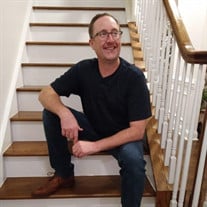 James A. A. Williams

With great sadness, the family of James A.A. Williams announces his passing on March 4, 2022. Jim was born to Rev. and Mrs. Gordon and Dorothy Childs Williams on June 14, 1970. He grew up in New York State; living in Sodus, Dewitt, Elmira Heights, and Penn Yan. As a teenager, his work experiences included delivering newspapers, serving doughnuts, painting tanks and dragging hoses for a local propane company, and assisting a surveyor. After graduating from Penn Yan Academy in 1988, Jim attended Alfred University where he earned both a Bachelor’s Degree at the SUNY School of Ceramics in 1993 and a Master’s Degree in Electrical Engineering in 1995. He met his future wife, Kelly Miller, at Alfred where she was studying Ceramic Art. Upon graduation, Jim and Kelly moved to Buckhannon, WV after he accepted a Ceramics Engineering position at Corhart Refractories. While working in Buckhannon, Jim earned an MBA degree from West Virginia Wesleyan in 1998 and was promoted to Plant Manager at Corhart. In 2000, shortly after the birth of their daughter, Madeleine, the family enjoyed two years in Avignon, France where Jim was a Project Engineer at Saint Gobain Ceramics. They returned to Buckhannon, expanded their family with the birth of Andrew, and moved to Louisville, KY. It was a shame that Jim’s father, who was commissioned a Kentucky Colonel by Governor Martha Layne Collins, did not live long enough to see his son residing in Kentucky. At the time of his death, Jim was employed at Saint Gobain Quartz in Louisville. In his role as Plant Manager, he provided productive and successful leadership and will be missed by his colleagues. Jim will be remembered for his wit and wisdom. He was well-read and had a wide variety of interests. James, who was named after his grandfathers, James Williams and Rev. Andrew Allison Childs, was interested in genealogy and preserving family heirlooms while building his own collection to be passed down to future generations. He celebrated his Scots-Irish heritage playing the bagpipes in the West Virginia Mountain Pipe Band. Jim enjoyed “ramming” the countryside and often ended up on spelunking adventures in the area. He was a supportive father who both loved watching his daughter’s ballet performances and coaching his son’s soccer team. He was known for telling ghost stories around the campfire to scare his son and nephew on camping trips to Bear Heaven. Family members will always remember how much he hated to lose card games. When it came to home repairs, he would research how to fix something for hours before he would give up and hire it out. Jim grew up in the Finger Lakes Wine Country of New York State and later enjoyed touring the wineries in Provence during his two years living in France. As a proud Kentuckian, he shared the bourbon trail with visitors to his home. Above all, he was devoted to his family and made their comfort and happiness a top priority in his life. Jim was predeceased by his father, Rev. Gordon McKee Williams, in 1995 and his wife of 24 years, Kelly Miller Williams, in 2020. He is survived by his two children Madeleine and Andrew; mother Dorothy Williams of Keuka Park, NY; brother John F.C. Williams and nephew Evan of Denver, CO; sister Margaret R.B. (Dave) Brongo of Geneseo, NY; mother-in-law Donna (Jeff) Baxter of Van Etten, NY; brother-in-law Rob (Bethany) Miller and their children, Nicholas, Olivia, and Samuel of Charlotte, NC; as well as several aunts, uncles, and cousins. A private memorial to be held in Louisville with burial in New York at a future date. Arrangements under the direction of Pearson’s,"Where Louisville Goes To Remember".

With great sadness, the family of James A.A. Williams announces his passing on March 4, 2022. Jim was born to Rev. and Mrs. Gordon and Dorothy Childs Williams on June 14, 1970. He grew up in New York State; living in Sodus, Dewitt, Elmira... View Obituary & Service Information

The family of James A. A. Williams created this Life Tributes page to make it easy to share your memories.

With great sadness, the family of James A.A. Williams announces...

Customized sympathy cards. Mailed for you.