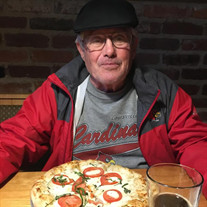 James Wilson Williams, 84 of Louisville passed away peacefully on October 31, 2021 at Baptist East Hospital. Born January 21, 1937 in Chattanooga Tennessee to Carl and Opal (Burkhead) Williams. Jim attended Shawnee high school, graduating class 1954, then attended college at the University of Louisville and served in the US Army Reserve, 100th division from 1960-1966 with 1.5 years active duty service. Married June 10, 1966 to Sherrill Ann Gordon who he loved. Jim worked for and retired from Coca-Cola USA. Jim was predeceased in death by his loving wife Sherrill, survived by his daughter Deborah Durling (Jeffrey) of Seneca SC, Richard Dukes (Lynne) of Louisville, Tracy McClanahan (Roderick) of Louisville, and Kevin Williams (Christy) of Louisville, three grandchildren Megan, Grace, and Carson, a brother Kenneth Williams (Patricia) of Louisville, two nephews Brian and Darin McCarthy of Louisville, and other family and friends, and his beloved dog and pal Max. Jim was a huge University of Louisville fan, and member of the Louisville Quarterback Club. He belonged to the Louisville Sail and Power Squadron for many years while boating on the Ohio River, and the Cherokee Road Runners back in the 1970-1980’s. Jim also loved going to Hilton Head SC, fishing, golfing, and bike riding. He loved jazz music, a good meal, and sports cars. Jim especially like spending time with his wife Sherrill and family-especially his grandchildren, and Max his dog. Visitation will be held on Tuesday November 2, from 4-7pm with a memorial service held on Wednesday November 3rd at 12:00pm at Pearson’s Funeral Home 149 Breckenridge Lane. Burial will be private. In lieu of flowers, memorial donations can be sent in his name to the Alzheimer’s Association 6100 Dutchman’s Lane, #401 Louisville, KY 40206, or to the Louisville Humane Society.

The family of James Wilson Williams created this Life Tributes page to make it easy to share your memories.

Send flowers to the Williams family.