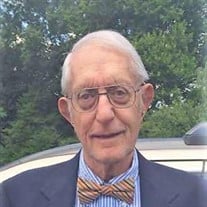 James (Jim) Forestus Nichols passed away in the presence of his family on June 14, 2020. Jim was born in Danville, Ky on May 5, 1932. He was a retired Chemical Engineer who worked for Olin Industries in Brevard, NC for ten years and retired form Rohm and Haas Company in Louisville after 26 years at various engineering positions. He attended Kentucky Military Institute in Louisville for two years and graduated from Episcopal High School in Alexandria, Va in 1950. Jim was a graduate of Centre College in 1954 and was a member of Sigma Chi fraternity. He completed a Master’s Degree in Chemical Engineering at MIT in 1956. Jim was preceded in death by his parents, Mr. and Mrs. John B. Nichols, Jr. of Danville, Ky, and his beloved wife, the former Alice Bullock, whom he met at Centre College and to whom he was married for 60 years. He is survived by three daughters, Martha Osborn (John) of Lexington, Ky; Nancy Ferguson (Mark) of Ashburn, Va; and Judy Schroeder (Mark) of Louisville; six grandchildren (Sarah Osborn, Johnny Osborn, Ashley Ferguson, Rachel Ferguson, James Schroeder and Andrew Schroeder); and a brother, Robert Nichols, of Louisville. Jim was a deacon of Brevard Davidson River Presbyterian Church in Brevard, NC, and deacon, elder, and Clerk of Session of Calvin Presbyterian Church in Louisville. Jim served as councilman of Devondale 4th class city, was a member of Glencannon Country Club and the Elks Club in Brevard, NC, member and volunteer of the Kentucky Science Center, member of the Filson Club, the Frazier History Museum, Quail Forever, ROMEO (Retired Old Men Eating Out) club, the Louisville Dog Run Association, the Louisville Agricultural Club (voice of Freddy Farm Bureau), Habitat for Humanity, former member of the American Institute of Chemical Engineers, Boy Scout Leader and a Kentucky Colonel. Jim enjoyed tennis, swimming (competed in Master’s swim meets) and working out at Blairwood Club. Other hobbies included sailing (in his OK Dingy), gardening, woodworking and hunting. Over the course of his life, he had fifteen beagles he used for rabbit hunting. He is survived by his lovable and peripatetic beagle Chloe. He also enjoyed quail, dove and pheasant hunting. Jim and Alice enjoyed traveling (domestic and foreign), particularly to the beach at Hilton Head and the Outer Banks. Visitation will be at Pearson’s, 149 Breckenridge Lane, on Thursday, June 18 from 4- 7 pm. Private burial at Cave Hill Cemetery. Expressions of sympathy can be sent to Calvin Presbyterian Church in lieu of flowers.

James (Jim) Forestus Nichols passed away in the presence of his family on June 14, 2020. Jim was born in Danville, Ky on May 5, 1932. He was a retired Chemical Engineer who worked for Olin Industries in Brevard, NC for ten years and retired... View Obituary & Service Information

The family of James "Jim" Forestus Nichols created this Life Tributes page to make it easy to share your memories.

James (Jim) Forestus Nichols passed away in the presence of his...

Send flowers to the Nichols family.