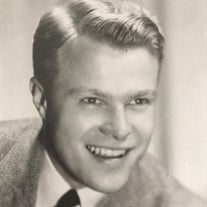 Louisville - James S. Munson (Jim to many and “Pop” to his close family) passed away on February 5th, 2020, with his family by his side. Pop was born July 28th, 1926 in Minneapolis, Minnesota to Lucille (Olsen) and Morris Munson. Jim a Navy veteran served his country proudly during WWII. He attended the University of Iowa, was a member of the Sigma Chi Epsilon Fraternity and graduated with an engineering degree. After graduation, Pop married the love of his life, Joyce Elaine (Libal) Munson and moved to Louisville, Kentucky and was employed by American Air Filter (30-year career with AAF). Many of Jim’s closest friends were colleagues of his at AAF. Pop’s greatest joys in life were being a Dad and “Super Fan” for his Ballard Bruins sons, grandchildren and nephew. There was not a basketball referee who did not fear the verbal abuse of Pop and Hank Lamp as they cheered on Jeff Lamp and the State Champion Ballard Bruins basketball team. Jim was a Christian and long-time member of Harvey Brown Presbyterian Church, provider, loving father and husband and our North Star. A man with a great sense of humor, an infectious laugh, who always had a kind word for all (accept basketball referee’s). He enjoyed the many family vacations at Tropic Terrance Hotel in Treasure Island, Fla. and the memories that we made on the beach and during the many fishing excursions. Mom (Ging) and Pop opened their hearts and house to so many of their children, grandchildren, nieces and nephews. After retiring from Strand Engineering in 1990, he and Joyce retired in Prospect, KY to be close to friends and family. Unable to sit still, Pop volunteered at Baptist East Hospital delivering the morning paper to patients, always with a smile. He will forever be in our hearts! Jim is preceded in death by his parents, Lucille and Morris Munson, Stepmother, Mickey Jacobsen, his son, Eric (Rick) Munson, his brothers, Maurice, Charles and John (his twin) Munson, his friend and brother-in-law, Hank Lamp and his nephew, Richard (Dick) Lamp. Jim is survived by his wife Joyce Munson, son, Todd Munson, daughter-in-law, Sue Munson, grandchildren, Aaryn Munson-Price, Benjamin and Nicholas Munson, grand-daughters-in-law, Mallory and Emily Munson, his great grandsons, Jamis and Emitt Price, Jaxon and Miles Munson (and soon to be great granddaughter), his sister Kris Lamp, nephews, Chuck Munson, Jeff and Bob Lamp and nieces, Mindy Munson, Lucy and Leslie Lamp, Lori, Christie, and Carrie Munson. A memorial service will be held on Saturday, March 7, 2020 at 12pm at Pearson's, 149 Breckenridge Ln. Visitation will be from 11am until the time of the service.

The family of James Stanley Munson created this Life Tributes page to make it easy to share your memories.

Louisville - James S. Munson (Jim to many and “Pop” to his close...

Send flowers to the Munson family.