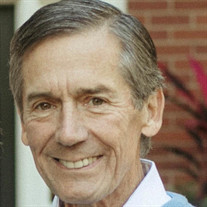 Retired Judge James "Jimmy" Curry Nicholson, 71, entered into eternal rest on Sunday, January 16, 2022. Jimmy was born on March 12, 1950, and was raised in Anchorage, Ky. He attended the University of Kentucky, where he was a member of the Kappa Alpha Order and an avid UK sports fan. He went on to attend the University of Louisville Louis D. Brandeis School of Law. He followed in the footsteps of his father, late Judge Samuel Rush Nicholson, and was elected Jefferson County District Judge at the age of 27. Jimmy carried out his 22-year judicial career with decorum and fairness, earning the respect of lawyers and litigants alike. Following his tenure on the bench, Jimmy brought the same values to his law practice, which he maintained until the time of his death. Jimmy lived his life with a fierce devotion to his family and his community. He was the son of Judge Samuel Rush Nicholson and Sarah Curry Nicholson, and the stepson of Whitney Vance Nicholson. He was a loving and dedicated husband to his wife of 42 years, Sarah Smith Nicholson, of Bowling Green, Ky. They were partners in every sense of the word, sharing the love of family, community, church, and golf. Jimmy wanted to see the world and was always planning their next adventure. Jimmy and Sarah raised their three children, Lauren Nicholson (Fernando), Elizabeth Nicholson (Gammon), and James "Curry" Nicholson, Jr. (Emily) with the utmost love and support. He was immensely proud of his children. The jewels in Jimmy's life were his grandchildren: Lucy; Jay; Nicolas; James Curry, III; and George. He adored their time together and especially enjoyed their family trips. He also leaves behind his sister, Cordelia "Dee" Nicholson Carter (Charlie); his brothers, Samuel Rush "Nick" Nicholson, Jr. (Susan); and David Lawrence Nicholson (Debra); his step-siblings, Nancy Billington (Stuart) and Vance Taylor (Anita); and scores of nieces, nephews, and cousins. Jimmy had the unique ability to maintain many lasting friendships throughout his life. Many of his friends referred to him simply as, "Judgie". He gave freely of his time and talents to his community and to charity. Jimmy was a lifelong member of Anchorage Presbyterian Church, where he served as an Elder. He served as President of the Anchorage Fire Board and Anchorage Civic Club, and was a member of the Owl Creek Country Club Board, Kentucky Bar Association, Buechel Masonic Lodge, and Louisville Scottish Rite. Jimmy will be remembered as a pillar of his community and his church, giver of life advice, role model, mentor, lover of home renovation projects, wrestler of his children and grandchildren, officiant of countless wedding ceremonies, and for his curiosity about the world. He was consistent and steady, and a believer in always taking the high road. The role of judge befitted his decent and honorable nature. Importantly, he had a great sense of humor and made everyone around him smile. Despite recent health challenges, he never gave into self-pity or despair, nor wanted such from his family and friends, but saw each day as a gift to be lived to the fullest. Finally, it must be said that his departure leaves an incalculable void in the lives of so many. Visitation will be from 3:00-6:30 p.m. on Thursday, Jan. 27, at Pearson's 149 Breckenridge Lane. His funeral service will be held at 2:00 pm on Friday, Jan. 28, at Anchorage Presbyterian Church 11403 Park Road; Anchorage, KY.. The service will also be live-streamed on www.youtube.com/anchoragepresbyterian. Face masks will be required for both the visitation and the funeral. Under the direction of Pearson's, "Where Louisville Goes To Remember". In lieu of flowers, please contribute to Meghan's Mountain Charitable Foundation, 4510 Ivy Crest Cir., Louisville, KY 40241 or to the Anchorage Presbyterian Church, 11403 Park Rd., Anchorage, KY 40223.

Retired Judge James "Jimmy" Curry Nicholson, 71, entered into eternal rest on Sunday, January 16, 2022. Jimmy was born on March 12, 1950, and was raised in Anchorage, Ky. He attended the University of Kentucky, where he was a member of the Kappa... View Obituary & Service Information

The family of James "Jimmy" Curry Nicholson created this Life Tributes page to make it easy to share your memories.

Send flowers to the Nicholson family.