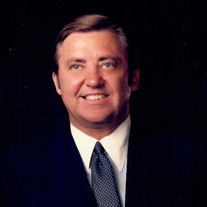 James “Jim” Hope Thornton, passed away on January 1st, 2022 at the age of 94. He was born in Lebanon, KY to Bertha and Andrew Thornton on December 8th, 1927. Andrew and Bertha moved their young family to the Louisville, KY area where Jim lived most of his life. He graduated from New Albany High School and married Lorraine Sunderhaus following graduation. They had four children together. Later, he married Bonnie Dance Hasenour and they had one son. At the young age of 16, Jim became interested in the oil business, first running his stepfather’s service stations, then developing his own. His first station was called Sunny's Service because everyone called him “Sunny” as a result of his upbeat personality, a quality he retained all his life. He next launched Payless Service stations which he sold to Ashland Oil in his mid-thirties. Not finding retirement to his liking, he once again started developing new stations which he named, Thorntons. Thornton Oil Corporation was sold to BP in 2018. In addition to the oil business, Jim was involved in veneer mills, real estate, hotels, restaurants and the rehabilitation of the Brown Hotel. Jim created the largest privately held company in the state of Kentucky and was Inducted into the Kentucky Business Hall of Fame. He also had a love of horses and was appointed as a Commissioner for the Kentucky Racing Commission. Most admirable of all, Jim was blessed with a kind and generous can-do spirit from a young age. He was committed to his family and to his community. He was one of the city’s leading philanthropists, in addition he contributed to many projects including the University of Louisville, 21st Century Parks (the Parklands), the Louisville Ballet, the Center for the Arts, and The Speed Art Museum. In addition, he contributed to all aspects of his community from east to west ends. His charismatic personality enabled him to make friends easily and make them for life. Jim loved life. He was predeceased by his wives; Lorraine Sunderhaus Thornton and Bonnie Dance Thornton and his sisters; Marilyn Peel and Lilly “Dody” Rissler Ellenberger and his daughter, Diane Thornton Zoeller. He is survived by his sister Ann Eiler , his children; Andy Thornton, Sue Ratliff (Kim), Bonnie Lee Duley (Pat), Eric Thornton, and Matt Thornton (Fran), son-in law Frank “Fuzzy” Zoeller (Diane) and his beloved grandchildren; Andrea Thornton (Aaron Mivelaz), Ashlee Harlin (Tom), Ben Thornton (Rawan), Clay Thornton (Karsen), Sunnye Zoeller (Damian), Heidi Hubler (Greg), Gretchen Wright (Chase), Miles Zoeller, Kimble Ratliff, Thornton Ratliff (Emory), Joyce Baumhauer (John Daly), Preston Ratliff (Alex), Handlin Duley, Caroline Ragsdale (Forrest), Henry Thornton, Grace Thornton, James Thornton and ten great-grandchildren. He will be missed by all. The family would like to thank the many wonderful caregivers who took such excellent care of our father, especially in his last days of life. You are a special group of people, and we appreciate all you did, more than you will ever know. We would also like to thank Bob Iezzi, who should probably be listed with the surviving family members, because he loved our father like a son and was the best friend he ever had. There will be a private graveside service for Family on Saturday, January 8th. Arrangements under the direction of Pearson's, "Where Louisville Goes To Remember." In lieu of flowers please make a donation to Honor James H. Thornton, to one of the two organizations below or one of your choice: • “Who’s Next, via Derrick Miller”, an AAU Basketball program to train and mentor Louisville’s inner city children for a path off the streets, 2525 Garland Ave. Louisville KY 40211 • The Parklands of Floyds Fork, 471 West Main Street Suite 202 Louisville Ky 40202. The Parklands is one of our nation’s finest donor-sponsored public park system.

James &#8220;Jim&#8221; Hope Thornton, passed away on January 1st, 2022 at the age of 94. He was born in Lebanon, KY to Bertha and Andrew Thornton on December 8th, 1927. Andrew and Bertha moved their young family to the Louisville, KY area where... View Obituary & Service Information

The family of James "Jim" Hope Thornton created this Life Tributes page to make it easy to share your memories.

Send flowers to the Thornton family.