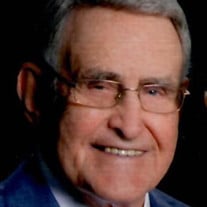 Jim, 90, was born in Shelbyville, Kentucky May 30, 1931, and died April 1, 2022. Jim is survived by his wife of 60 years Mary Ann (Munford) Ratcliffe, three daughters: Pamela Ratcliffe (Helen Hinton), Louisville; Kathryn (Ratcliffe) Payne (Keith), Atlanta; Linda (Ratcliffe) Fuller (Adam), Atlanta; and four grandchildren: Parker and Payton Payne, Jackson and Austin Fuller, all of Atlanta; and niece, Lisa Ratcliffe, Lexington. Jim was preceded in death by his mother Louise McCormack Ratcliffe, his father, Roy Davis Ratcliffe, his brother, Roy Davis Ratcliffe, Jr. and his niece, Deborah Ratcliffe of Lexington. Whatever Jim accomplished in life would not have happened without the support of his dear mother, “his angel from heaven on this earth” and his dear brother, during his early years through college and even later. His father died when he was a very young boy. His wife, Mary Ann, and his three daughters meant more to him than life. His four grandchildren were always his “pride and joy”, since the day they were born. He was their “Dedad”. He was an honor graduate of Shelbyville High School in 1949. He was a member of the first basketball team from Shelbyville to go to the state tournament at UK. When he graduated from high school, he received the Yeager, Ford, and Warren scholastic award for math by Centre College. He was always very grateful to his basketball coach, Evan Settle, who served as his mentor during his high school years. At Centre College, Jim was an honor student and a starting guard on the Centre College basketball team all four years. He was a member of Phi Delta Theta fraternity (president during his senior year) and was an honors graduate in 1953. After graduation from Centre, Jim served as President of Centre College Alumni Association, was honored as a distinguished alumni in 1989, and Centre Associate in 1996. He served on the Board of Trustees of Centre from 1997-2011, and became a Centre Board Emeritus. Jim was a member of Broadway Baptist Church for many years, where he was a deacon and chairman of trustees. He was a previous member of Crescent Hill Baptist Church, where he was also a deacon, chairman of trustees, and the finance committee. Jim joined the accounting firm of Yeager, Ford and Warren, after serving in the US Army, and in 1955 became a partner. Yeager, Ford and Warren merged with the international firm of Coopers and Lybrand in which Jim became the Managing Partner of their Louisville office during the last eight years of his career. (Coopers and Lybrand later merged with what is now PriceWaterhouseCoopers). He served on the Board of the Kentucky Society of Certified Public Accountants and received the society’s public service award in 1986. Jim served on the State Board of Education for seven years, including one term as president, under Gov. John Y. Brown. He also chaired the Kentucky Chamber of Commerce Committee for Kentucky Education Improvement. He was responsible for a major recommendation to change the position of State Superintendent from elected to appointed by the State Board. This was enacted by the state legislature. He served as 1990 board chairman of the Louisville area Chamber of Commerce, and was also a board member of the Greater Louisville Economic Development Partnership. He served a short time as interim president of the Chamber after his retirement in 1992. He worked successfully with other active Chamber board members to combine the two organizations, which is now Greater Louisville Inc. (GLI) He was a part owner, board member, and board chairman of Baptist Health Milestone Fitness Center. He was also a board member of Baptist Health and Baptist Hospital State System. Jim enjoyed playing golf and was a former Valhalla and Louisville Country Club member. He enjoyed spending time gardening, watching UK basketball, following politics, and spending the winter months in Naples, Florida with Mary Ann (with visits from all their children and grandchildren). Most of all he enjoyed spending time with his family, especially their summer vacations together. A Memorial Service will be held at Broadway Baptist Church, 4000 Brownsboro Road at 2:00 pm on Saturday, April 9th followed by visitation in fellowship hall. Private burial will be at Cave Hill Cemetery. In lieu of flowers, expressions of sympathy may be made to Broadway Baptist Church Mission Fund, Crescent Hill Baptist Church, Hosparus, or Centre College. Arrangements under the direction of Pearson's, "Where Louisville Goes To Remember".

The family of James "Jim" McCormack Ratcliffe created this Life Tributes page to make it easy to share your memories.

Send flowers to the Ratcliffe family.