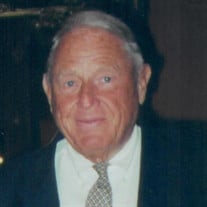 James Pryor Hancock, 97, passed away on Saturday September 19, 2020. Pryor, a native of Louisville, was born on October 28, 1922 to the late Lily May and Dr. Jethra Hancock. Pryor was a graduate of Louisville Male High School class of 1940; he attended the University of Kentucky and the University of Louisville Medical School during 1940 - 1943. He was a Veteran of the United States Army serving from 1943-1946. Upon discharge, he returned to the University of Kentucky graduating with a BS and Law degree in 1949. He remained active in the Army Reserves as Lt. Colonel in the Judge Advocate General Corps (JAG); and Commander of the 147th JAG Detachment until his retirement in 1982. He was a former Judge for the City of Rolling Fields where he resided since 1967. He married Barbara Heinz of Pittsburgh, PA in 1949 and they settled in Louisville and spent 66 wonderful years together. He became an associate of the law firm of Middleton, Seelbach, Wolford, Willis and Cochran, later he was associated in law with James B. Young, and Thorp L. Wolford. Pryor was a member of Phi Delta Theta fraternity, Phi Chi medical fraternity, and Phi Delta Phi legal fraternity. He was a former member of the Young Lawyer Club of Kentucky, Louisville Bar Association, the Wranglers Club, Kentucky Colonels, Society of Colonial Wars, the Jamestown Society, University of Kentucky Fellow, and a member of the Pendennis Club. Pryor cherished his summers at Chautauqua Lake, basking in the sun, and enjoying cocktails on the porch with family and friends. Pryor was a true Southern gentleman; he had a gracious personality and will be truly missed by all. He was preceded in death by his parents; his wife of 66 years, Barbara Heinz Hancock, daughter Linda Hancock, and grandson Frederick H. Hancock Jr. He is survived by sons James P. Hancock Jr. and Frederick “Chip” Hancock (Jennifer) his grandchildren James P. Hancock III (India), Margaret Hancock, Michelle Hancock, Cole Hancock, and Mac Hancock, and beloved first cousin, Ewing Fahey. A private family graveside service will be held at Cave Hill Cemetery on Friday September 25, 2020. In lieu of flowers memorial gifts may be given to the Chautauqua Foundation, P.O. Box 28 Chautauqua, NY. 14722 or the charity of your choice.

James Pryor Hancock, 97, passed away on Saturday September 19, 2020. Pryor, a native of Louisville, was born on October 28, 1922 to the late Lily May and Dr. Jethra Hancock. Pryor was a graduate of Louisville Male High School class of 1940;... View Obituary & Service Information

The family of James Pryor Hancock created this Life Tributes page to make it easy to share your memories.

Send flowers to the Hancock family.