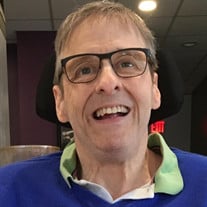 James P. Crawford, MD, age 64, passed away peacefully at home on March 10 after an extended illness. Jim graduated with honors from JM Atherton High School, where he met his true love and future wife, Ruth Randolph Turner. He moved on to Georgetown College, where he graduated summa cum laude in 1979, with a BS in biology and chemistry. Jim went on to earn an MBA at Bellarmine University and he launched a company, Nautical Designs in the 1980s, that took he and Ruth all over the country to boat shows and conventions. Soon, the lure of a career in medicine could not keep him away from home. In 1996, he graduated from the University of Louisville Medical School, where he served as class President all four years. Following an internship at U of L in Internal Medicine, he completed a three year residency program in physiatry (physical medicine) at Indiana University. Dr. Crawford worked with patients to enhance and restore functional ability and quality of life to those with physical impairments with Rehab Associates of Indiana in Indianapolis. In his youth, he earned the rank of Eagle Scout and the scout motto set the tone for the rest of his life. He was an avid fisherman and enjoyed hosting hayrides and bonfires at his family’s farm in southern Indiana. Jim could fix or build anything and was a master woodworker.. He and Ruth often travelled to Torch Lake, Michigan to fish and sail with his cousins the Holdens. Jim was known for his keen wit, his kindness to others, and his mastery of trivia--especially in-depth knowledge of classic movies. Travelling with his medical school friends was a great joy. He was preceded in death by his parents, Juanita Harris Crawford and Kenneth Paul Crawford, MD. He is survived by his loving wife Ruth, to whom he was married for 39 years. Other family members include: Carol Crawford Schmidt (Vincent), Robert Harris Crawford (Elizabeth Ballard), Kenneth Ray Crawford (Laura Walker), Piper Turner, and a multitude of nieces, nephews and God-children, all of whom adored him. The family would like to thank loving caregivers: Robert Dominick Webb, Rebecca Flick, Diane Davies, Laura Morris, and Akela, the husky dog. Gratitude is expressed to those who helped care for Jim during his convalescence, and especially to his devoted wife Ruth Randolph Turner Crawford, who took extraordinary care of him. Visitation will take place at Pearson's, 149 Breckenridge Lane at 10 a.m. with a memorial service to follow in the Chapel at 11:00 am. Burial will follow at Cave Hill Cemetery. Due to Covid 19, the following protocols will be observed: masks are required, social distancing of 6 feet. In lieu of flowers, Jim requested donations go in his name to Great Pyrenees Rescue of Indianapolis (igpr.org) or the University of Louisville Medical School.

James P. Crawford, MD, age 64, passed away peacefully at home on March 10 after an extended illness. Jim graduated with honors from JM Atherton High School, where he met his true love and future wife, Ruth Randolph Turner. He moved on to Georgetown... View Obituary & Service Information

The family of James P. Crawford M.D. created this Life Tributes page to make it easy to share your memories.

Send flowers to the Crawford family.