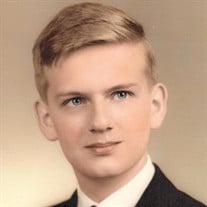 James Robert Bentley, 78, was laid to rest in the Rite of Episcopal burial in Cave Hill Cemetery on the afternoon of Saturday, April 18, 2020. Jim died peacefully at his home Wednesday, April 8, 2020. Due to restrictions in accordance with... View Obituary & Service Information

The family of James Robert Bentley created this Life Tributes page to make it easy to share your memories.

James Robert Bentley, 78, was laid to rest in the Rite of Episcopal...

Send flowers to the Bentley family.