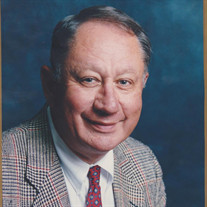 Homer A Holt, Jr., M.D. passed away peacefully on Thursday, December 2, 2021, at his home surrounded by his loving wife Ginny and his children, Kathy, Kim, and Homer III. Homer was born July 6, 1938, in Ashland KY to the late Homer A Holt, Sr. and Fannie Kathryn (Haywood) Holt. Homer Jr was the eldest of 6 children and a wonderful son and brother. Homer grew up in Hopkinsville, KY, and knew at an early age he wanted to be a physician, carrying around a box of band-aids on his belt in case of emergency. Homer was an Eagle Scout and excelled both academically and athletically. He graduated from Vanderbilt University, where he was a member of Beta Theta Pi fraternity and played on the golf team. Homer continued his education at the University of Louisville, School of Medicine; during that time, he married Ginny Cayce on Thanksgiving Day in 1962. Homer completed his medical training in general surgery at Bergstrom Air Force Base in Austin, Texas, under the Berry plan. Homer and Ginny moved back to their home state to raise their children in Louisville, where he continued his surgical training, specializing in urology. When his urological training was complete, he joined the prestigious practice of Doctors Lich, Mauer, Howerton, Amin, and Harty. Homer’s medical career included numerous positions in the Jefferson County Medical Society and the KY Urological Association. He was a respected and beloved physician and served in many organizations in various capacities throughout his career. In addition to private practice, he was a Clinical Professor of Surgery in Urology at the University of Louisville School of Medicine, and thoroughly enjoyed mentoring young residents, preparing them for their medical careers. Homer was on the staff at the VA Medical Center, Methodist, Norton, Jewish, Baptist East, and Suburban Hospitals. During his years in private practice, he also made bi-monthly trips to see patients in Paoli, IN. At the end of his career, Homer volunteered his time, providing care and compassion to patients at The Healing Place. Homer thoroughly enjoyed the practice of medicine and will be fondly remembered by his many patients and their families, the residents he mentored, and the staff in the hospitals in which he practiced. Homer also considered himself a gentleman farmer, raising tobacco and caring for his horses in Shelby County. Homer was a country boy at heart and enjoyed his time on the farm immensely. Homer was an avid fox hunter and hunted regularly with the Long Run Hounds in Simpsonville where he and Ginny established life-long friendships. He was also a member of the National Steeplechase Association and was an accredited Steward. Homer was preceded in death by his parents Homer Sr. and Kathryn, and his brother Douglas. He is survived by his loving and devoted wife of 59 years, Virginia (Ginny) Cayce Holt and his children who thought the world of their father; Kathryn (Kathy) Holt Kerpestein and her husband Mike; Kimberly (Kim) Holt Cochran and her husband Tommy; and Homer Holt, III and his wife Lori. Homer was lovingly called “Doc” by his 8 grandchildren: Peter and Sara Kerpestein, Thomas and Virginia Cochran, and Homer IV, James, Charles, and Haley Holt. He is also survived by 4 siblings, brothers David (Mary Alice) Holt; Richard Holt; Stephen (Lynn) Holt and beloved sister Susan Holt (Jim) Thurman, many nieces and nephews. During his final years Homer was not only cared for by Ginny but also by Garry Smalley, whose big personality uplifted Doc’s spirit even on the most difficult days! We are also thankful for the nurses and caregivers with Hosparus, Trisha, Becky, Sherry, Shannon and Liana, who were instrumental in keeping Doc comfortable at home, and Kim who helped care for Homer on the weekends. In lieu of flowers, donations may be made to Hosparus of Louisville www.hosparushealth.org , the Kentucky Alzheimer’s Association www.alz.org/kyin , or the Williams Syndrome Association, www.williams-syndrome.org Visitation this Sunday, December 5, 2021, 1:00-4:00 pm, Pearson’s 149 Breckenridge Lane, Louisville KY. Funeral service Monday, December 6, 2021, 1:00 pm, Christ Church United Methodist, 4614 Brownsboro Rd., Louisville, KY. Arrangements under the direction of Pearson's, "Where Louisville Goes to Remember".

Homer A Holt, Jr., M.D. passed away peacefully on Thursday, December 2, 2021, at his home surrounded by his loving wife Ginny and his children, Kathy, Kim, and Homer III. Homer was born July 6, 1938, in Ashland KY to the late Homer A Holt, Sr.... View Obituary & Service Information

The family of Homer A Holt, Jr. M.D. created this Life Tributes page to make it easy to share your memories.

Send flowers to the Holt, family.