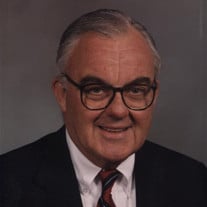 Herbert Mason Richardson, Jr., 89, died peacefully January 20, 2020, at the Sam Swope Care Center. He was born in St. Louis, Missouri on September 15, 1930 to Florence E. Knotts and Herbert Mason Richardson. He will be remembered by his loved ones for his quick wit, love of music and travel. He graduated from Oakwood High School, Dayton, Ohio and attended the University of Kentucky where he became a loyal member of Sigma Chi Fraternity. Herbert served in the U. S. Army and was discharged in 1956 from Fort Dix, New Jersey as First Lieutenant. Herbert first worked for National Cash Register, Dayton, Ohio, which led to a long career in banking, mostly for First National Bank in Louisville, Kentucky as Senior Vice President. He also worked in commercial banking in Knoxville, Tennessee and New Orleans, Louisiana. He was a director for Volunteers of America, Spina Bifida Assoc., Knoxville United Way, Knoxville Symphony, and Kentucky Council on Economic Education. He was a member of St. Francis in the Fields Episcopal Church, Louisville Downtown Rotary, Filson Club Historical Society and Kentuckians of New York. He was also a member of Harmony Landing Country Club, the Pendennis Club, Cherokee Country Club, Knoxville, and the Long Run Hunt Club. He was preceded in death by his son, Herbert Mason Richardson, III as well as the mother of his sons, Nancy Doerhoerfer Mason. He is survived by his sister Barbara King (Hugh) and Cissy Riley (Jimmy, dec.) both of Lexington, Kentucky and by his son, David T. Richardson (Towns Richardson) of Louisville and his grandchildren, Mary Winston, Katherine and Pierce Richardson and his loving companion, Eileen Coen of Louisville, Kentucky. We are especially grateful for the care and kindness he received from Peggy and Ricky Madden, the staff of the Sam Swope Care Center at Masonic Homes of Kentucky and Hosparus of Louisville. Visitation for friends and family is 4-7 p.m., Friday, January 24th at Pearson’s, 149 Breckenridge Lane and funeral is 10 a.m., Saturday, January 25th at the Chapel in Pearson’s Funeral Home. In lieu of flowers, the family asks that expressions of sympathy be made to St. Francis in the Fields Episcopal Church, Harrods Creek, Kentucky.

The family of Herbert Mason Richardson Jr created this Life Tributes page to make it easy to share your memories.

Send flowers to the Richardson family.