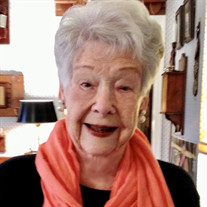 Helen Lucille Armstrong Whitney Terhune, born February 1, 1915, passed away peacefully on November 4, 2020 at the tender age of 105. Originally from Muncie, IN, Helen moved to Kentucky with her first husband, the father of her three children, Robert L. Whitney, where the two established Whitney Stables. In Kentucky, she was a beloved first grade teacher at Cox’s Creek Elementary for 12 years. Her students fondly remember Helen as an honest, caring and devoted educator. Likewise, Helen’s children recall their mother as a woman of her own means; a teacher, a soldier, and strict disciplinarian. (She had no choice but to be a strict disciplinarian at home, as her children would frequently try to sneak their ponies into the house!) Helen was also a devout Christian, a loving caregiver and worthy leader both in her family and within the community. She possessed rare style, stature and standards. From fried chicken, mashed potatoes, gravy, and vinegar slaw on Sundays to massive meals for the whole family on the holidays, Helen was an excellent cook who truly enjoyed both the preparation and celebration. Helen was also a bit of a jokester who loved to organize games for her students, children, and later her grandchildren and great-grandchildren. True to character, that spunkiness, spryness and sharp mental acuity were apparent all through her life, even in her final days. Additionally, Helen was a real go-getter who loved to travel, to see new places and meet new people, and she thoroughly enjoyed driving herself to new and exciting destinations at every opportunity. After she and Whitney divorced, Helen married the late Charles Terhune, who shared her sense of adventure. Together, the couple traveled the globe and each time returned home with photos, stories, and souvenirs for the family. But despite their hectic travel schedule, it was always clear to all who knew Helen that family came first, forever and always. Helen’s love of family was reciprocated by her three children (Marilyn Jo Cornell, Lexa Anne Bentley, step-son, Chuck Terhune, and the recently deceased Philip R. Whitney), as the three took turns hosting their mother for extended stays in their homes following Charles’ passing. She is also predeceased by her sister, Marjorie Nottingham. On Helen’s 90th birthday, which she was lucky to celebrate together with all three children, Helen had one simple request: “I want to ride a horse!” Not ones to deny their mother, a horse was groomed and readied, and Helen (with help from her kids) hoisted herself into the saddle. A few years later, Helen settled in at the Barton House in Louisville, and for the past several years, her children have gussied up Helen’s favorite pony with ribbons and rhinestones, and brought him to the Barton House to visit Helen on her birthday, which of course, was a true delight for Helen and her fellow residents. Once again, even in her declining years, Helen continued to be the life of the party! In addition to her three children, Mrs. Terhune is survived by grandchildren, Kellee Peace, Carma Ogline, Lissa Roberts, Liz Rollins, Midge Hunt, and Blake Cornell; great grandchildren, Madison Hunt, Logan Hunt, Whitnee Matthews, Shyanne Matthews, Haylee Peace, Preston Ogline, Calvin Rollins, Claudia Rollins, Liesel Rollins, Iona Rollins, Reagan Roberts, Philip Roberts and one great-great- granddaughter. She is also survived by her beloved nieces, Janet Hartley and Carol Ray. Due to Covid-19, there will be a celebration of life at a latter date. Expressions of Sympathy can be made to Hight Street Methodist Church (219 S. High Street Muncie, IN 47305).

Helen Lucille Armstrong Whitney Terhune, born February 1, 1915, passed away peacefully on November 4, 2020 at the tender age of 105. Originally from Muncie, IN, Helen moved to Kentucky with her first husband, the father of her three children,... View Obituary & Service Information

The family of Helen Lucille Terhune created this Life Tributes page to make it easy to share your memories.

Send flowers to the Terhune family.