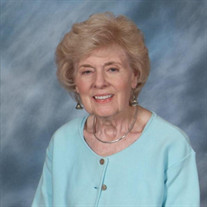 Helen Goodyear Barrier of Louisville, KY was called away to join her late husband, Edward Martin Barrier, the morning of December 18. She was born in Mullins, SC to Rupert and Estalena Goodyear. Helen received a BS in Library Science from Winthrop University while minoring in the organ. While in college, she also played tennis and basketball. After graduation, she worked in New York City, then at Duke University where she met Martin, a P-38 fighter pilot in WWII. Marrying in 1948, they eventually discovered a resting place for their hearts in Louisville, KY. During this time, Helen received her Master's in Library Science from Spalding University and worked as a school librarian for Jefferson County Public Schools until her retirement. She was active in The Kentucky Association of School Librarians. Helen was a loyal member of St. Paul Methodist Church for 63 years where she served in many capacities, her favorites being the church librarian and rocking babies in the nursery. Helen was highly skilled at counted cross-stitch tapestries, played tennis into her 70s, and even had a social circle at the gym she frequented well into her 90s. She was also an avid bridge player throughout her adult life, and played a major role in upholding traditions in her immediate family, and will be greatly missed. She is survived by her daughter, Rebecca Nelson (Jim) of Georgetown; her grandsons, Barry Saturday (Barno) and Mark Stephens; her great-granddaughters, Athena and Aurora Saturday; her sister-in-law, Juanita Goodyear; her nieces, Judy Gould (Steve) and Carolyn Horton (Bill); her nephews, Marion Goodyear (Pat) and Martin Underwood (Lori) as well as her precious poodle, Rosie. Helen is predeceased by her daughter, Helen Virginia “Ginger” Elliott, and her husband of 46 years, Edward “Martin” Barrier. Memorial arrangements are pending. There will be a service at a later date, when all can gather safely to celebrate Helen’s life. In lieu of flowers, donations may be made to ASPCA (www.aspca.org) or St. Paul Methodist Church (2000 Douglass Blvd. Louisville, Ky. 40205)

Helen Goodyear Barrier of Louisville, KY was called away to join her late husband, Edward Martin Barrier, the morning of December 18. She was born in Mullins, SC to Rupert and Estalena Goodyear. Helen received a BS in Library Science from Winthrop... View Obituary & Service Information

The family of Helen Goodyear Barrier created this Life Tributes page to make it easy to share your memories.

Helen Goodyear Barrier of Louisville, KY was called away to join...

Send flowers to the Barrier family.