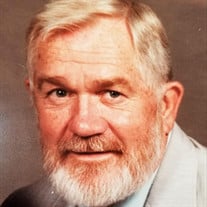 Harold Grange Omer passed away at Episcopal Church Home on Friday August 20, 2021 with family by his side at the age of 94. Harold was an outstanding father and grandfather and a friend to all. He could fix almost anything and was always willing to lend a helping hand to anyone in need whether it was installing a water heater, balancing a checkbook, or serving up gallons of his home-made vegetable soup at church functions and fund raisers. He always had a pocket full of jokes at ready for most any occasion and he recognized strangers only as “friends I haven’t met yet.” The son of Leroy Omer a descendent of a long line of Omer’s from Jeffersontown and Boston native, Blanche M. Smith, Harold was born June 27, 1927 in Louisville where he lived his entire life. He excelled in football and golf at Manual High School and where his first name initial and his last name on his papers became the nick name “Homer.“ He was also known by some as “Red” because of his red hair. He and his wife Eustacia Gardner Omer, who predeceased him, were long-time members of Clifton Baptist Church where he was a deacon, taught Sunday school, played on several athletic teams and coached. Both Harold and Eustacia were members of Highland Baptist Church during their later years. Harold began earning much of his own keep on the golf course as a caddy at the age of nine. At various times he was employed by The Mengel Company, Dupont, Tube Turns, and he ran his own fire extinguishing company. He retired from Orr Safety. He often had second jobs to make ends meet. He refereed high school football, basketball, baseball and softball for many years. In retirement he played golf regularly with a group at Cherokee, winning first place in the senior games and continuing to shoot his age through most of his 80's. He was able to help his daughter with her antique business and he spent much quality time with his grandson Clayton Omer. Redirecting the support he had given his own children in their athletic pursuits allowing his backyard in Crescent Hill to be turned into playing fields including pole vault and sand filled long jump pits he turned his backyard into a dirt track so grandson Clayton could ride BMX bikes. He outlived his parents, his wife, four siblings and his only daughter Susan Omer. Harold is survived by his two sons, Tony, his wife Susan Safford and Tim and his wife Janet, three grandchildren, Alexandra Glover (Mark), Sarah Omer and Clayton Omer (Ashley James) and four great grand-children, Cailin, Jaxon and Xander Glover and Clementine de Forest. There will be time for visitation Wednesday, August 25th, 3-7 PM at Pearson’s, 149 Breckenridge Lane. A memorial service will take place the next day, Thursday, August 26th at Highland Baptist Church, 1101 Cherokee Road at 11 AM. Burial will be Private. Donations can be made in Harold’s name to Highland Baptist Church or a charity of choice.

Harold Grange Omer passed away at Episcopal Church Home on Friday August 20, 2021 with family by his side at the age of 94. Harold was an outstanding father and grandfather and a friend to all. He could fix almost anything and was always willing... View Obituary & Service Information

The family of Harold Grange Omer created this Life Tributes page to make it easy to share your memories.

Send flowers to the Omer family.