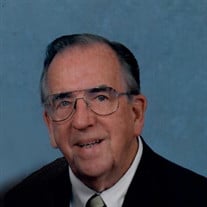 Guy Malcolm Bentley, age 95, died on September 3, 2021, in Louisville KY. Malcolm was born in Louisville on January 17, 1926. He was raised in the West End of Louisville attending Stephen Foster Elementary School, Shawnee Junior High, and graduating from DuPont Manual Training High School in January 1944. Upon graduation, he enlisted in the United State Navy and served in the Pacific Theater of the Second World War. At the end of the war, Malcolm returned to Louisville where he attended the University of Louisville and married Joanne Smith. They were married 64 years before Joanne died in 2017. Malcolm spent is career in the glass and glazing industry where he was the owner of Central Glass Company and a past president of the Builders Exchange. He was a long-time member and elder emeritus of Beargrass Christian Church. Malcolm’s life cannot be summed up in a few sentences, so one must suffice. He was a good and decent man. Malcolm was preceded in death by his father Raymond Allan Bentley, his mother Jetty Watson Bentley, his sister Doris Elaine Savage, stepmother Nell Tracy and stepsister Charlotte Ann Mullins. He is survived by his two children Perry Bentley (Kristen) and Amy Bentley Hall (David); six grandchildren Joshua Bentley (Megan), Kathryn Fetter (Joey), Jack Bentley, Jordan Hall, Ethan Hall, Jasmine Bentley; three great-grandchildren Oliver Malcom Fetter, Elliot Glenn Fetter, Pauline Elizabeth Bentley. Funeral Service will be Thursday September 16th at 11 am at Beargrass Christian Church, 4100 Shelbyville Road, with burial Friday September 17th in Fordsville, KY. Visitation will be held 4 pm -7 pm Wednesday September 15 at Pearson’s, 149 Breckenridge Lane, and 10am until the time of service at the Church. In lieu of flowers, the family requests that donations be made to Beargrass Christian Church in his memory.

The family of Guy Malcom Bentley created this Life Tributes page to make it easy to share your memories.

Send flowers to the Bentley family.