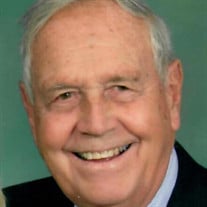 Gorman Jones Roberts, Sr. 96, passed away peacefully on Sunday April 11, 2021. Gorman was born on May 18, 1924 in Knoxville, TN, the only child of Thomas Jefferson and Dorothy Jones Roberts. He grew up in Williamsburg, KY where his father was president of the bank and his mother was a schoolteacher and the church organist. Gorman graduated from Cumberland Academy at age 15, and attended Cumberland College, spending his summers at Culver Military Academy. Gorman cherished his early years fishing and playing sports. He was an excellent baseball player and was offered professional contracts by both the Yankees and Reds, playing briefly for the Yankees, backing up Joe DiMaggio in center field. He left baseball to serve his country in World War II. From 1942-46 he was part of the US Navy 7th Fleet. His best friend, Gorman Siler, was killed during the war flying a B-17. His memory of those impressionable years was retold in great detail to those who asked, as he shared what only a member of the “Greatest Generation” can recall. Following the war, Gorman graduated with honors from Northwestern University, where he was a member of Phi Delta Theta, and received his MBA from the Harvard Business School. He happily admitted he may have cut a few classes during those years to attend a game or two at Wrigley Field and Fenway Park. He began his business career in 1949 as a Trust Officer at the Louisville Trust Company. In 1965 he joined JJB Hilliard & Son, became a partner in 1967, and chaired the Sales, Marketing, and Branch Administration Committee until retirement in 1989. Gorman’s strong work ethic and devotion to clients and colleagues were virtues he lived every day. He was a true gentleman, always kind, and generous. Gorman served on the boards of the Southern Baptist Theological Seminary, chaired the Southern Baptist Foundation, and was a deacon at Crescent Hill Baptist Church. He was President of the Harvard Club of KY, founding member of Harmony Landing Country Club, and member of the Pendennis Club. In his later years he became a member of Second Presbyterian Church. He enjoyed spending time with friends on the golf course both in Louisville and Bonita Springs, FL. Gorman adored his wife, Madge Barnett Roberts, his best friend of 66 years and was devoted to his family. He is survived by Madge and their 3 children, Jeff (Paula), Joan Roberts Benton (Rush), and Gorman, Jr. (Kristie); 7 grandchildren, Grant Roberts (Brianne), Matthew Benton (Macey), Katherine Roberts Ogle (Jake), Clark Benton (Sarah), Jack Benton, Nicholas Roberts, and Thomas Roberts; and 5 great-grandchildren, Beau, Lily, Hattie, William, and Rush. The family deeply appreciates the wonderful care provided by Treyton Oak Towers and Hosparus Health of Louisville. A private graveside service will be held at Cave Hill Cemetery. In thanksgiving for Gorman’s life and legacy, memorial gifts can be made either to Treyton Oak Towers (211 W. Oak Street, Louisville, KY 40203) or Second Presbyterian Church (3701 Old Brownsboro Road, Louisville, KY 40207) or The Louisville Orchestra (620 W. Main St. Suite 600, Louisville, KY 40202). Arrangements under the direction of Pearson’s. "Where Louisville Goes To Remember".

Gorman Jones Roberts, Sr. 96, passed away peacefully on Sunday April 11, 2021. Gorman was born on May 18, 1924 in Knoxville, TN, the only child of Thomas Jefferson and Dorothy Jones Roberts. He grew up in Williamsburg, KY where his father was... View Obituary & Service Information

The family of Gorman Jones Roberts Sr. created this Life Tributes page to make it easy to share your memories.

Send flowers to the Roberts family.