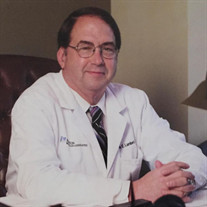 On Wednesday, May 26, 2021, Glenn E. Lambert, Jr., M.D., beloved husband, loving father, and dedicated physician, passed away at age 75. Glenn was born in Pensacola, Florida on November 23, 1945 to Frances and Captain Glenn E. Lambert, Sr. As a Navy child, Glenn Jr. lived across the United States. Glenn graduated from Duke University, and he graduated with highest honors from the Tulane University School of Medicine. He completed his General Surgery Residency at Bellevue Hospital/NYU and the University of Louisville Department of Surgery. He received his Vascular Surgery Fellowship at Baylor University in Dallas, Texas. For two years, Glenn served his country as a General Surgeon in the Air Force. Glenn practiced in Louisville, Kentucky as a General Surgeon and as a Vascular Surgeon for over forty years. For the last three years, until the day he died, Glenn was a Wound Care Physician for Norton Healthcare. Glenn is a member of the Alpha Omega Alpha Society; the American College of Surgeons; the Society for Vascular Surgery; the Southern Association for Vascular Surgery; the American Medical Association; the Kentucky Medical Association; and the Greater Louisville Medical Society. Glenn E. Lambert, Jr., M.D. is survived by his wife of thirty-nine years, Carol Zehnder Lambert, and his daughter, Madeleine Lambert. Visitation from 10 AM-2 PM on Sunday, May 30, 2021 at Pearson's, 149 Breckenridge Lane. Burial to follow at Cave Hill Cemetery, Louisville, Kentucky. In lieu of flowers, donations may be made to the American Heart Association.

The family of Glenn E. Lambert, Jr., M.D. created this Life Tributes page to make it easy to share your memories.