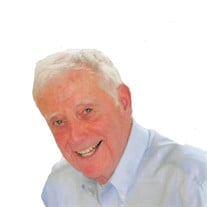 Gilbert Paul Stengel, Sr. (Gil) entered into eternal life on March 30th. He was born May 11, 1929 to the late Robert and Mary Rose Stengel and was the youngest of eight children. He is survived by his wife Helen Jene Wren Stengel and brother, John Vincent Stengel, and four children: Jennifer Wentworth (Rance) of Bowling Green KY; Gilbert Stengel, Jr. (Yuki) of Burlington, KY; Tracey Butler (Wendell) of Frankfort, KY and Bradford Stengel (Charlotte) of Louisville. Gil (Papa) was blessed with eight grandchildren: Ezra, Morgan, Eric, Catherine, Meagan, Natalie, Maxwell, and Samantha. He was preceded in death by his brothers Robert, Eugene, Richard and Ralph and sisters, Mildred and Dorothy. Gil was drafted into the Army branch of the military out of high school where he was stationed in Germany during the Korean and Cold War. During that time he was put to use with his talents as an artist working in the topographic map-making unit until his return to the United States at the age of 22. He studied at the American Academy of Art in Chicago for two years, then finished his studies in Graphic Design at the Art Center College of Design in Los Angeles in 1953. Returning to Louisville he worked in the marketing and advertising industry as a graphic designer with long time partner, the late Jack Smalley. There he met his life love, Helen and they were married in 1958. After retiring from the advertising business, they moved to Bowling Green where he taught Graphic Design in the Communications Department at Western Kentucky University from 1987-1997. Gil spent the last 30 years of his life expressing his artistic talents through his insatiable love for drawing and painting. His sense of style and sense of humor, kind and loving heart will be dearly missed, but his memory is preserved in the amazing artwork he has left us behind. Funeral mass will be celebrated at Saint Frances of Rome Catholic Church, 2119 Payne St. Louisville, KY 40206 on Sunday, April 7th at 2PM with a brief visitation preceding the service from 1:00-2:00 PM. Visitation will be held Saturday April 6th from 4-7 PM at Pearson’s Funeral Home, 149 Breckenridge Ln., Louisville, KY. In lieu of flowers, expressions of sympathy can be made with donations to Hosparus Health Louisville and the American Cancer Society.

Gilbert Paul Stengel, Sr. (Gil) entered into eternal life on March 30th. He was born May 11, 1929 to the late Robert and Mary Rose Stengel and was the youngest of eight children. He is survived by his wife Helen Jene Wren Stengel and brother,... View Obituary & Service Information

The family of Gilbert Paul Stengel Sr. created this Life Tributes page to make it easy to share your memories.

Send flowers to the Stengel family.