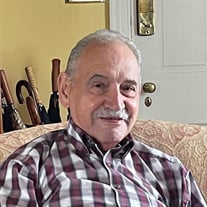 Gerald “Jerry” L. McCrocklin, 80, of Louisville (resided in Georgetown IN), passed away on Thursday, September 16, 2021. Jerry was a proud veteran of the United States Navy. He retired after 33 years with the Engelhard Corporation. He is preceded in death by his parents, Jesse Graham and Gladys McCrocklin, brother Morris, and dear friend Delores “Sue” M. Kreutzer. Jerry will be sorely missed. As we continue in life’s journey, the sound of laughter will be a constant reminder of Jerry. His ever-present smile, sense of humor and off the wall jokes will not be forgotten. You always knew when Jerry was in the room, as he made it a point to mingle and speak to all that were present. He was the life of the party. He is survived by his wife Patricia, brothers Kenneth (Rebecca) and Dan McCrocklin, sisters Mary Peniston, Yvonne Hardin, and Sheila Litchfield (Gerry). His children: Debbie Holmes (Bill), Lonnie (Carla), Vera Hobbs (Ernie) and Tony Smith, 9 grandchildren, 9 great grandchildren, his best friend Rick Lesch and a host of other family and friends throughout his lifetime. We are comforted to know that with his passing he will spend eternal life with our Lord and Savior, Jesus Christ. Funeral Service will be 1 pm Wednesday, September 22, 2021 at Pearson’s, 149 Breckenridge Lane with burial at Resthaven Memorial Park. Visitation is 3-7 pm Tuesday, September 21, 2021 at Pearson’s and 11 am until time of service Wednesday In lieu of flowers donations can be made to the American Cancer Society in Jerry’s honor.

Gerald &#8220;Jerry&#8221; L. McCrocklin, 80, of Louisville (resided in Georgetown IN), passed away on Thursday, September 16, 2021. Jerry was a proud veteran of the United States Navy. He retired after 33 years with the Engelhard Corporation. He... View Obituary & Service Information

The family of Gerald L. "Jerry" McCrocklin created this Life Tributes page to make it easy to share your memories.

Send flowers to the McCrocklin family.