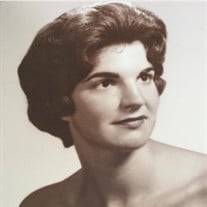 Georgia M. Doukas March 26, 1941- July 13, 2021 Georgia was born in Boston, MA. on March 26, 1941 and grew up in Wellesley, MA. After she graduated from Wellesley High School in 1958, she attended Katherine Gibbs School in Boston where she learned her excellent secretarial and management skills. Over the years she put them to good use at the positions she held at Honeywell Electronic Data Systems in Wellesley Hills. MA., the Director of Development at Portland ME Museum of Art, and when she worked in the Office of Institutional Development of at Bellarmine College/University in Louisville, KY. She later became the manager of the bookstore at Bellarmine. Georgia had many talents. She opened a shop, The Knitter’s Loft, in Louisville where she not only sold knitting supplies, she also gave knitting lessons. Her family and friends were the recipients of her beautiful knitted creations from scarves to sweaters. Georgia also had a talent for cooking. The Greek pastries she made, the Baklava, Galaktoboureko, and Koulourakia were her specialties. Her signature creation was her chocolate brownies. Whenever she was invited to dinners at friends’ homes or other occasions, these brownies were her contribution to the events. She sometimes joked that the brownies were the reason why she was invited. She eventually would share her recipe with family and friends. Georgia leaves behind her three children, her daughter Debra who took such wonderful care of her when she could no longer take care of herself these last several years, and her sons David and Drew. She is also survived by her sister, Theodora Manty in San Francisco, her nephew, Michael Seldon and his family in Bedford, MA, and her nieces, Karin Reed of Dover, MA., and Dianne Reed of Mills, MA. She also leaves behind the many friends she had made over the years. She was predeceased by her parents, Peter and Aspasia Manty, her sisters Eugenia Manty, Thalia Reed, and Sandra Seldon. She was also predeceased by her two canine companions, Walker and Hershey. They brought her such comfort over the years especially when she was ill Georgia donated her body to the University of Louisville Department of Anatomical Sciences and Neurobiology. The Celebration of Life will be Sunday, July 25, 2021 between 1:00-4:00 p.m. at Pearson’s Funeral Home. Donations in Georgia’s name can be made to: Louisville Humane Society 1000 Lyndon Lane Suite B Louisville, KY. 40222

Georgia M. Doukas March 26, 1941- July 13, 2021 Georgia was born in Boston, MA. on March 26, 1941 and grew up in Wellesley, MA. After she graduated from Wellesley High School in 1958, she attended Katherine Gibbs School in Boston where she... View Obituary & Service Information

The family of Georgia M. Doukas created this Life Tributes page to make it easy to share your memories.

Send flowers to the Doukas family.