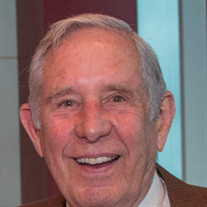 George Sabin Gibbs III, 87, of Louisville, died peacefully in his home on January 23, 2022. George was born April 16, 1934 in Annapolis, Maryland to Rear-Admiral Robert Henry Gibbs (1988) and Elizabeth Kilgore Gibbs (1979). He was preceded in death by his first wife Mary Dell Matthews (1994), his sons David Wesley Gibbs (1979) and Donald Matthew Gibbs (2016). Throughout his life, he had many accomplishments. The first of many was winning the National Championships in two-man Kayak and 4-man canoe. The Olympics in Helsinki, Finland beckoned, but George elected to finish his college career at NC State University with a degree in Forest Management and a minor in Wildlife Management. George served in the US Army in 1958 for two years and then his career with the US Forest Service began. He was responsible for developing land use plans for an area of 640,000 acres on 5 separate National Forest. George was known for developing a checkerboard burning program reducing forest fires from 37 to 7 per year. A lifelong nature enthusiast, George focused much energy on the revival of the American Chestnut tree. He is survived by his wife Betty Kilgore Moss Gibbs, two stepchildren, Jack A. Moss, Jr. (Susan) and Gwinn Marie Moss, and three step-grandchildren Elliott Kilgore Moss, William Wesley Moss, and Louise Rhodes Moss. George spent the latter years of his life living in Louisville with his beloved wife, Betty, where they passed many hours in their beautiful garden. Their love of gardening extended into their philanthropic life by creating the Moss Gibbs Woodland Garden, where there will be a celebration of George’s life held in the spring. There will be a private family burial. In lieu of flowers, expressions of sympathy may be made to the Moss Gibbs Woodland Garden at The Parklands of Floyds Fork, 471 West Main Street #202; Louisville, KY 40202 or donor’s favorite charity.

The family of George S. Gibbs created this Life Tributes page to make it easy to share your memories.

Send flowers to the Gibbs family.