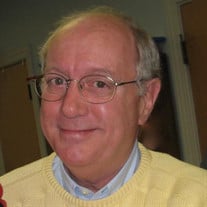 George C. “Shaver” Collins III, 75, died June 8, 2020. He was born in Odessa, Texas, the second of 4 children of George Hunt Collins and Theodora Lowry Barret. Shaver grew up in Louisville, KY and graduated from Atherton High School, during which he was a member of the Athenaeum Literary Association. He later enlisted in the United States Army and served a tour of duty in Germany and Vietnam during the Vietnam War. Upon returning from the war, Shaver graduated from the University of Louisville. After graduation, he went to work for the family business which distributed RCA and Whirlpool products. Shaver married Linda Hohman in 1974, and shortly after adopted her two children, Frank and Chapin. Shaver and Ed Rhawn eventually went on to purchase The Collins Company from his father and ran it successfully until both manufacturers changed their distribution models. Having already volunteered for years for Junior Achievement, Shaver was hired as President in their Louisville office. He spent the last 15 years of his working career as an investment advisor with UBS, Raymond James and Wells Fargo before retiring in 2012. Shaver was a long-time active member of the Capitol Loss Club; an unwavering UofL sports fan; and an active member of St. Matthews Episcopal Church. Shaver is survived by his wife Linda, their two children Frank (daughter Pyper) and Chapin (wife Dana and sons Ford and Davis), and his brothers Barret Hunt Collins & George Hunt Collins, Jr. He was preceded in death by his sister, Lowry Collins. Shaver was a devoted husband, a loving father and grandfather, a loyal friend, always having a warm smile that just preceded his contagious laugh! And most of all an honorable man. In lieu of flowers, donations can be made to Junior Achievement, 1401 W. Muhammad, Louisville, KY 40203 or Decode Project at P.O. Box, 17209, Louisville, KY 40217. Due to the current uncertainty and risk regarding group gatherings, Pearson’s Funeral Home will coordinate notification of a funeral to be held at a later date.

The family of George C. "Shaver" Collins III created this Life Tributes page to make it easy to share your memories.