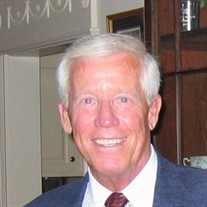 Gary McDonald Russell 83, passed away peacefully on January 16, 2022. Gary was born in Louisville and raised in Lyndon, KY. He graduated from Eastern High School in 1956 where he was both quarterback and captain of the varsity football team. He attended and graduated from Butler University where he was a member of the Sigma Chi fraternity and an avid fan of the Indianapolis 500. After completing college Gary was proud to serve in the Army reserves. In 1967 he started RussTech where he was both founder and president. With his tenacity and fierce leadership, RussTech grew into a successful and national chemical business. Gary was a Kentucky Colonel, an avid tennis player and a huge fan of the Kentucky Wildcats. Gary loved Bonita Beach Florida where he could be found on the beach watching sunsets and taking long walks with friends and family. At home, you could always find him at his pool and enjoying his grandchildren when they came over to swim. Gary was preceded in death by his father, Carl D. Russell, his mother Beatrice D. Sumser, and his sister Donna R. Hall. Gary is survived by his loving wife of 58 years, Sue A. Russell, his son, Gary D. Russell (Cindy), his daughter Abby R. Jackson and his grandchildren, Courtney, Audrey, Gary Jr., and Alex, along with many nieces, nephews, and cousins. Visitation will be from 4-7 p.m., Friday, January 21st at Pearson's, 149 Breckenridge Lane with a funeral service to follow on Saturday at Noon at the funeral home. Burial will be private. Arrangements under the direction of Pearson's, "Where Louisville Goes To Remember." In lieu of flowers, please send donations to the Alzheimer's Foundation of America: https://alzfdn.org/

Gary McDonald Russell 83, passed away peacefully on January 16, 2022. Gary was born in Louisville and raised in Lyndon, KY. He graduated from Eastern High School in 1956 where he was both quarterback and captain of the varsity football team.... View Obituary & Service Information

The family of Gary M. Russell created this Life Tributes page to make it easy to share your memories.

Send flowers to the Russell family.