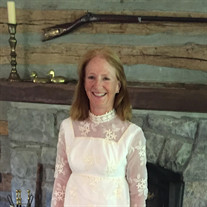 Gail Poust Slater passed away peacefully in the presence of her family 10/22/2019. She was born in Evanston, IL. on February 23, 1950 and grew up in Glenview, IL. She graduated from Glenbrook South High School in 1968 near the top of her class. She was an excellent pianist and was the feature performer in the school water ballet program. She graduated from Vanderbilt University in 1972 and briefly taught high school math before becoming a stock broker with Paine Webber in Ann Arbor, MI in 1975. She received numerous awards as a broker and developed a broad base of clients who followed her to Louisville where she moved in 1985. Her son William (Billy) was born that year and despite a busy full time career she was always involved in his school activities. She retired in 2002. Throughout her life she enjoyed a wide variety of activities including tennis, golf, water skiing, camping, canoeing, mountain biking, rock climbing, whitewater rafting, and horseback riding; once winning a barrel racing competition. She enjoyed travel, especially to countries where she could speak French. She always said that many of her best days were spent on almost yearly house boat-water ski family trips to Lake Cumberland or boating on the Ohio River. In her younger years she taught cotillion, but through out her life she loved to dance and with her unlimited energy was often the first one on the dance floor and the last to leave it at a party. She was a member of the Louisville Country Club, the Louisville Boat Club, the Field Club and the Oaks Club in Sarasota, multiple book clubs, Second Presbyterian Church, and the Speed Museum Patrons Circle. Her primary hobby was duplicate bridge and she became a silver life master. Her other passion was adult literacy and she tutored individuals in both Louisville and in Sarasota, FL her winter home. Many have said “Gail lived life at full speed and never took her foot off the gas pedal” despite a 40 year battle with diabetes. She never saw people having fun with an activity she didn’t want to try including hang gliding off a 2,000 foot cliff and free falling at the Shot Over Canyon Swing in New Zealand at age 63. The lower picture is 65 year old Gail in her 44 year old wedding dress she was offering to her soon to be daughter in law. She was a devoted wife to her husband of 48 years, A David Slater. She is also survived by her son, William Slater (Brooke), mother, Patricia Poust, brother John Poust, and multiple aunts and cousins of the Poust family with whom she remained close. Funeral service will be 2 p.m., Saturday, October 26, 2019 at Second Presbyterian Church, 3701 Old Brownsboro Road, Louisville, KY. Visitation will be 4-7 p.m., Friday, October 25, 2019 at Pearson’s, 149 Breckenridge Lane, Louisville, KY. In lieu of flowers expressions of sympathy may be directed to the American Diabetes Association.

Gail Poust Slater passed away peacefully in the presence of her family 10/22/2019. She was born in Evanston, IL. on February 23, 1950 and grew up in Glenview, IL. She graduated from Glenbrook South High School in 1968 near the top of her class.... View Obituary & Service Information

The family of Gail Poust Slater created this Life Tributes page to make it easy to share your memories.

Gail Poust Slater passed away peacefully in the presence of her...

Send flowers to the Slater family.