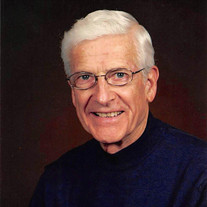 Frank Neil Preston, 91, of Louisville, Kentucky passed away peacefully on December 9, 2019. He will be remembered as a man dedicated and devoted to everything he did in life. Frank was born on June 14, 1928 in Great Falls, Montana to the late Philip and Helen Preston. He graduated from Ontario High School in Ontario, Oregon. Frank proudly served in the United States Army during the post-war World War II occupation of Japan. Frank then entered the University of Oregon in 1948 where he became a loyal member of Theta Chi Fraternity. From the University of Oregon, he received his bachelor’s degree. While at the university, he met his future wife, Julie Fuller. After receiving his undergraduate degree, Frank attended New York University on a scholarship and graduated with a Master of Science in Retailing. Following his graduation, Frank and Julie were married in July of 1953. Frank was employed at Shillito’s in Cincinnati and at Macy’s in Kansas City. While at Macy’s, he bought Reed Handcrafts, a table linen manufacturing company in Kansas City. He then merged Reed Handcrafts with Louisville Bedding Company where he directed the Reed Handcrafts division. Frank became Executive Vice-President of Louisville Bedding Company, a position he retained until his retirement. During his time at Louisville Bedding, Frank developed Expand-A-Grip mattress pad for which he received a patent. After his retirement, Frank started Unlimited Horizons consulting business. Outside of his professional life, Frank devoted time giving back to his community. While in Kansas City, he served on the Executive Committee of his sons’ Boy Scout Troop and coached his boys’ little league baseball team. Frank also volunteered with Bill Sands Seventh Step program for the rehabilitation of former convicts. In Louisville, Frank served on the board of directors of the Thomas Edison House where he developed their Invention Convention program. Throughout their married life, Frank and Julie have been proud members of the Methodist Church. They have been members of Christ Church United Methodist in Louisville for over 45 years. Frank’s other memberships include: Kentucky Colonels, Sons of the American Revolution, Adventurers Sunday School Class (where he was president) and participation in volunteer mission work for Christ Church, including Habitat for Humanity and the Portland Center in Louisville, Kentucky. Some of his greatest passions included working in his yard and spending time with his family. Later in life, while on family trips to Colorado, Frank became an avid skier. He skied the slopes of Colorado each year until he turned 87 years old. Frank was preceded in death by his brother, Phil Preston and his sister, Pat Chism. He is survived by his loving wife of 66 years, Julie; children, Michael Preston (Lou Ann) of Lenexa, Kansas, Dana Polonsky (Jay) of Littleton, Colorado, and Dan Preston (Carol) of Louisville, Kentucky; grandchildren, Travis Preston (Melinda), Tyler Preston, Whitney Henson (Andrew), Scott Preston (Carrie), Lee Preston, Shelby Polonsky, and Zach Polonsky; great-grandchildren, Lauren Preston, Kendall Preston, Austin Henson; sister, Lourana Echanis of Ontario, Oregon; brother-in-law, Harry Fuller of Park City, Utah and many nieces and nephews. The family wishes to thank their caregiver, Sarah O’Callaghan Gray, Barton House and Hosparus for their loving care and concern during the past several months. A memorial service will be held on Saturday, December 21, 2019 at 11:00 a.m. in the chapel at Christ Church United Methodist (4614 Brownsboro Rd. Louisville, Kentucky 40207). Visitation will be after the memorial service at church in Fellowship Hall from 12p.m. until 2p.m. In lieu of flowers the family requests donations to the Portland Promise Center (1831 Baird St. Louisville, Kentucky 40203).

Frank Neil Preston, 91, of Louisville, Kentucky passed away peacefully on December 9, 2019. He will be remembered as a man dedicated and devoted to everything he did in life. Frank was born on June 14, 1928 in Great Falls, Montana to the late... View Obituary & Service Information

The family of Frank Neil Preston created this Life Tributes page to make it easy to share your memories.

Send flowers to the Preston family.