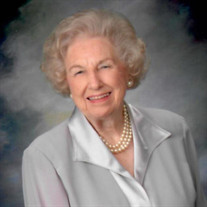 Frances Craig Wiggins, age 102, died on Saturday, March 6 in her home on Merrick Road in Louisville, KY surrounded by family. Mrs. Wiggins was born in Selma, Alabama on June 13, 1918 to the late Benjamin Hogan Craig and Emma Vaughn Craig. She became a resident of Louisville after her marriage to the late Charles “Newt” Wiggins in 1940. Mrs. Wiggins was an active member of the Louisville Woman’s Club, the Monday Afternoon Club, and belonged to Christ Church United Methodist. She also enjoyed membership in Colonial Dames of America, and the John Marshall Chapter of Daughters of the American Revolution. She was co-founder of the Play and Study group associated with Highland Community Ministries, and also served as a docent at the Locust Grove historic home. Mrs. Wiggins is preceded in death by her beloved husband, Newt, who died in 1995. She is survived by her three children, Elizabeth Humphrey and Susan Steffen of Louisville, and Dr. Craig Wiggins of Frankfort, seven grandchildren, and twelve great-grandchildren. Donations in her name may be made to the Heuser Hearing Institute at 3900 Dupont Square, Suite D, Louisville, KY 40207. Funeral Service will be at 10am on Saturday, March 13 at Pearson Funeral Home, 149 Breckenridge Lane, with burial to follow at Cave Hill Cemetery. Visitation will be Friday, March 12 from 4 to 8pm. Arrangements under the direction of Pearson's, "Where Louisville Goes To Remember". Due to Covid Pandemic, masks and social distancing will be required.

The family of Frances Craig Wiggins created this Life Tributes page to make it easy to share your memories.

Send flowers to the Wiggins family.